Sarkozy to appeal decision to send him for trial over campaign 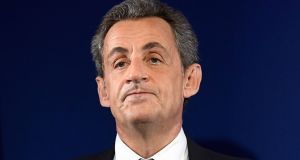 Nicolas Sarkozy has been accused of surpassing the €22.5m legal ceiling on campaign expenditure by spending at least €42.8m on his 2012 campaign. Photograph: AFP/Getty Images

The former French president Nicolas Sarkozy is to appeal a judge’s decision to send him for trial with 13 other people for the illegal financing of Mr Sarkozy’s 2012 presidential campaign.

Judge Serge Tournaire has accused Mr Sarkozy of surpassing the €22.5 million legal ceiling on campaign expenditure by spending at least €42.8 million on his campaign. He allegedly ignored accountants’ warnings on March 7th and April 26th, 2012, that the limit had been exceeded.

Mr Sarkozy could become the second former president of the Fifth Republic to be tried in criminal court. In September 2011, Jacques Chirac was given a two-year suspended prison sentence for his role in a fake jobs scandal 15 years earlier, when he was mayor of Paris. Mr Chirac was tried in absentia because of poor health.

If convicted, Mr Sarkozy in theory faces up to a year in prison and a €3,750 fine.

During the 2012 campaign, when opinion polls showed that support for Mr Sarkozy was failing, he turned his campaign rallies into US-style extravaganzas with special effects and multiple giant screens.

Cost overruns were billed to an events company called Bygmalion, which was employed by the conservative UMP party. Mr Sarkozy subsequently changed the name of the UMP to LR (for “Les Républicains”) in the hope the public would forget the scandal, which left the party tens of millions of euro in debt.

Supporters pledged to pay off the debt in a “Sarkothon” fundraising drive.

The LR nominee in this year’s presidential election, Francois Fillon, told parliamentarians, “I have a touching thought for Nicolas Sarkozy and all those [from LR] who will be accused by the justice system in coming days.”

When they were competing for the LR nomination last year, Mr Fillon alluded pointedly to the scandals involving Mr Sarkozy, saying, “Who imagines de Gaulle under investigation?”

Mr Fillon, his wife and two of the couple’s five children are the subject of an investigation by the Paris financial prosecutor’s office that members of the candidate’s family were paid by the state for non-existent jobs. Mr Fillon and his lawyers dispute the prosecutor’s legal competence to continue the investigation.

Since April 2013, Mr Sarkozy has been under investigation for having allegedly received millions of euro from the late Libyan dictator Muammar Gadafy in 2007, and for awarding government contracts for opinion polls to his former adviser Patrick Buisson without entertaining other bids.

Presidential immunity prevented Mr Sarkozy from being pursued for the sham arbitration that awarded €405 million to his friend Bernard Tapie in 2008, arising from Mr Tapie’s sale years earlier of his stake in the Adidas sportswear giant.

Mr Sarkozy’s lawyer, Thierry Herzog, pointed out that Mr Tournaire was only one of two investigating magistrates handling the case, and that the other judge, Renaud van Ruymbeke, had refused to sign the order sending Mr Sarkozy to trial. Mr Herzog said his client would appeal the decision.

Mr Herzog also noted that Mr Sarkozy had already been punished by the constitutional council in July 2013 for surpassing authorised expenditure. He said the former president should not be punished twice for the same offence, though he did not acknowledge that the amounts of money involved turned out to be far greater than was known at the time.