Erdogan says he won’t be threatened over Syrian incursion 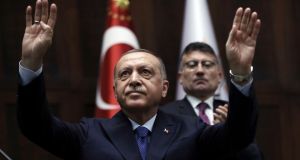 Turkish president Recep Tayyip Erdogan as he addresses his ruling party legislators at the parliament in Ankara on Wednesday. Photograph: Burhan Ozbilici/AP

Turkey’s president Recep Tayyip Erdogan has attacked an “ugly” decision by US prosecutors to file criminal charges against a Turkish state-owned bank as he warned that he would not be cowed by threats over his contentious incursion into Syria.

Speaking ahead of the arrival of Mike Pence, the US vice-president, in Ankara for talks aimed at halting the military operation, Mr Erdogan questioned the timing of the announcement by New York prosecutors that Halkbank would face six counts of bank fraud and conspiracy to evade US sanctions. “It had seemed like this issue was closed,” he told reporters. “Now, by opening it again, southern New York prosecutors have unfortunately taken an unlawful, ugly step.”

Mr Pence’s visit, due to begin on Thursday, comes amid mounting tensions between the two countries over the Turkish decision to launch an offensive against Kurdish militias in northeast Syria. Ankara views the group’s terrorists but Washington sees them as key allies in the battle against Islamic State jihadis in the region.

Donald Trump, the US president, appeared to give the green light for the operation when he announced last week that he would pull US troops in the region out of harm’s way. But, facing a harsh backlash at home and abroad, he has sought to limit the Turkish offensive.

On Monday, as the US imposed sanctions on Turkey, Mr Trump warned that he would “aggressively use economic sanctions to target those who enable, facilitate and finance . . . heinous acts in Syria”.

Although the measures were milder than many had expected, Mr Trump said he was “fully prepared to swiftly destroy Turkey’s economy” if the country’s leaders continued on their “dangerous and destructive path” in Syria.

The Southern District of New York, which announced the prosecution against Halkbank, one of Turkey’s biggest lenders, is known for its independence. But the timing of the charges against it will be viewed with deep suspicion in Ankara.

Halkbank said in a statement that the charges were filed as part of the Trump administration’s sanctions package in response to Turkey’s military incursion, which the bank said had been “heroically launched by the Turkish Army to secure our borders and establish peace in the region”.

Members of Mr Pence’s delegation – which includes Mike Pompeo, secretary of state, and Robert O’Brien, the new White House national security adviser – will use meetings with their Turkish counterparts to push for an agreement to halt the Turkish offensive, his office said before the visit.

But Mr Erdogan warned ahead of the meeting that he had no interest in negotiating with Kurdish “terrorists”, adding that Turkey was “not looking for mediation for that”.

In a speech to the Turkish parliament, he vowed that Turkey would push on with his goal to clear Kurdish forces from a 32km deep and 480km stretch of land that runs from the town of Manbij, west of the Euphrates river, to the Iraqi border.

He called on Kurdish militias to “lay down their arms, leave their equipment, destroy the traps they have created and leave the safe zone we as designated, as of tonight”. He added: “If this is done, our Operation Peace Spring will end by itself.”

He warned that economic threats against Turkey would not succeed, invoking the story of the Ottoman triumph against Allied powers at the battle of Gallipoli. “We are the grandchildren of those at Canakkale [Gallipoli] who were so poor that they shared one cup of soup. We are the grandchildren of those who wrote that legend.” – Copyright The Financial Times Limited 2019