Michael D Higgins thanks Cyprus for ‘solidarity’ with Ireland 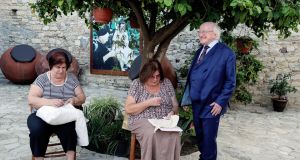 “Small islands” such as Ireland and Cyprus “are inherently vulnerable” to the “forces of nature” as well as “the ravages of expansionist and acquisitive empires”, President Michael D Higgins told the Cypriot parliament on Wednesday.

Mr Higgins, who again called on all countries to co-operate on the challenge of climate breakdown, was welcomed at the house of representatives in Nicosia by the speaker Demetris Syllouris, who touched upon issues which have dominated talks in Europe this week.

Capturing the mood in the house, Mr Syllouris said: “We pray against a no-deal Brexit.” Having attended centenary celebrations of the Dáil in January, the speaker also called for the strengthening of ties between the two parliaments.

In his address, Mr Higgins thanked Cyprus and other EU member states for for the “solidarity shown” Ireland as Britain prepared to leave the EU, jeopardising the Good Friday Agreement which had brought peace over the past 20 years.

“The potential creation of any hard border on our island could put this hard-won process at risk,” the President said.

Since he had visited the old city of Nicosia and seen the local manifestation of the line dividing the island, he expressed the hope that Cyprus could be reunited and full reconciliation achieved between the Greek and Turkish Cypriot communities.

He called for fruitful co-operation between the two islands in culture, law, business, food, environment and maritime relations.

Mr Higgins was critical of the “blunt handling” by the European Union of the global financial crisis but said both the Irish and Cypriot peoples emerged due to their resilience. He argued that due to EU failures “social cohesion has been significantly damaged across our union”, leading to the “rise of euroscepticism, exclusionary forms of nationalism and austerity-sourced populism” based on fear and ignorance, which lead to antagonism against migrants.

The president pointed out that 10,000 Irish soldiers had served with the UN peacekeeping force in Cyprus

While he declared the the EU to be a community of laws, values and economic and social relations, he stated unequivocally that European values were “not being upheld uniformly”, ushering in “the politics of division, fear and blame” which undermined democracy and freedom.

The president pointed out that 10,000 Irish soldiers had served with the UN peacekeeping force in Cyprus and that this commitment had been maintained through An Garda Síochána in the UN police force. Commenting also on Irish support for the Committee on Missing Persons, which is supported financially by Ireland, he hoped that its efforts would heal the wounds of loss and support bereaved families whose relatives disappeared during the 1963-1964 troubles and the 1974 Turkish invasion of the north of the island.

Mr Higgins closed by addressing the problems posed by global migration and the need to deal with the sources of poverty, conflict and forced migration. He urged aid donors to focus on the areas from which people fled as well as countries which received them.

Following the house session, the presidential party toured the hill village of Lefkara, famous from the time of Shakespeare where local women have produced “Lefkara lace”, graceful embroidery currently made on Irish linen.

Famagusta in Cyprus is the site of Shakespeare’s Othello and, in bygone days, Cypriot fabrics, carob syrup and cumin were sold in London markets – a reminder that globalisation is not a contemporary phenomenon.

Mr Higgins wound up his visit with a tour of Larnaca castle where he met representatives of organisations which have maritime, business and environmental ties to Ireland. Asked about the problems created by Brexit during a media event, he pointed out that Ireland and Britain were neighbours and intended to cultivate good relations if there was divorce.

The presidential party took a brisk walk along the seafront at dusk and paused at a cafe for before the President departed for an official visit to Lebanon, having completed the Greek and Cypriot legs of his tour of the region.