Strongest words yet from Assad-supporting Moscow heaps pressure on Ankara 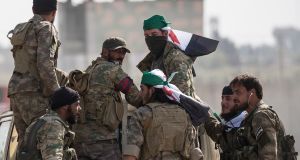 Russia has said Turkey’s military assault on northeastern Syria is “unacceptable”, heaping pressure on Ankara as Moscow seeks to capitalise on a US withdrawal from the region to help Syrian president Bashar al-Assad reassert control.

Alexander Lavrentiev, President Vladimir Putin’s special envoy for Syria, told reporters that the offensive launched last week by Turkey against Kurdish forces in the country’s northeast had not been agreed with Russia, which has emerged as the most influential foreign power in Syria.

In the harshest comments yet from a Russian official, Mr Lavrentiev said Moscow had “always believed that any military operation in Syrian territory is unacceptable”.

He said the security of the Turkish-Syrian border “should be ensured . . . by way of deploying government forces along the entire border” – a suggestion that directly conflicts with Ankara’s plan to control a 32km-deep stretch of the country’s northeast.

The warning from Moscow came two days after Kurdish forces struck an emergency deal with the Syrian regime in order to ward off a Turkish assault against them. That pact has seen Mr Assad, backed by Moscow, re-establish a military presence in several northern towns that had been controlled by US-backed Kurdish forces under the Syrian Democratic Forces umbrella.

Turkey’s president Recep Tayyip Erdogan insisted on Tuesday that Ankara was proceeding with its plan to assert control over a 480km stretch of the border from the Syrian town of Manbij, east of the Euphrates river, to the Iraqi border. He vowed to secure the region “within a short time”.

But the strong words from Russia, which has become an important partner for Turkey in Syria, served as a reminder of the constraints likely to be imposed by other foreign powers. They came less than 24 hours after US president Donald Trump also set out his own red lines on the Turkish incursion and announced US sanctions on Ankara.

Sinan Ulgen, chairman of the Istanbul-based think tank Edam, said that, from a military perspective, Mr Erdogan could control the whole border region if he wanted to. But he added: “The obstacle is of a more political nature, about what happens if he decides to do it.”

Kerim Has, a Moscow-based analyst of Russia-Turkish relations, said he believed that Mr Erdogan had hoped to gain “much more territory” after launching his offensive last week but had been boxed in by the rapidly shifting dynamics and the demands of Washington and Moscow.

“Ankara, in my opinion, doesn’t have any choice other than reaching a deal with Russia and the US,” he said.

Mark Esper, US defence secretary, said on Tuesday that US troops were retreating partially because they were “at risk of being engulfed in a broader conflict”, underscoring fears that international powers could be dragged into direct confrontation in the chaotic northeast Syrian theatre.

Despite a pledge by Mr Erdogan to send Turkish-backed Syrian rebel groups into Manbij, the Syrian army moved into the border town on Tuesday, filling a vacuum left by US forces whose bases there had been part of an effort to assuage Turkey’s security concerns.

Mr Lavrentiev also revealed that “real time” negotiations were taking place between the Turkish and Syrian defence and foreign ministries and their intelligence services. “A dialogue between Turkey and Syria is taking place, it is taking place continuously,” he said in remarks published by state-run news agencies.

At least 160,000 people have fled a week-long Turkish military advance into northeastern Syria, launched by Mr Erdogan against Syrian Kurdish forces linked to Kurdish militants who have waged an insurgency inside Turkey for four decades.

The Kurdish People’s Protection Units (YPG) form the backbone of the SDF, trained and armed by a US-led coalition to combat Isis jihadis who had conquered swaths of northeast Syria. But Mr Trump decided to get US troops out of the path of Turkey’s army early last week, in effect ending US protection of its Kurdish allies and the semi-autonomous region the Kurds had carved out in north-east Syria.

Battered by Turkish assault, which the SDF says has killed 75 people, the Kurds turned to the Syrian regime in Damascus, via Moscow, to blunt Ankara’s attack. Kamal Akif, spokesman for the SDF’s foreign affairs department, confirmed that the agreement pertains only to military arrangements thus far. However, Mr Akif conceded that a broader political settlement could come next, as the Assad regime solidifies its authority over a country fractured by eight years of civil war. – Copyright The Financial Times Limited 2019