Amnesty International says Egypt executed 57 men and women in October and November, compared with 32 during all of 2019 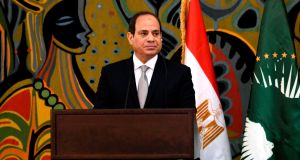 Egypt has freed three rights activists after widespread international condemnation over their imprisonment following a public meeting with 13 western diplomats to discuss the dire situation in the country.

Shortly after last month’s encounter they were detained by security forces and charged with “joining a terrorist organisation” and “using social media accounts to spread false news”.

Karim Ennarah, Gasser Abdel-Razek and Mohamed Basheer work for the Egyptian Initiative for Personal Rights (EIPR), the most prominent of the few rights groups to have survived president Abdel Fattah al-Sisi’s widespread crackdown on activists, journalists and critics.

They were released from the forbidding Tora prison on the outskirts of Cairo after the United Nations, France, Germany and high-profile film stars Scarlett Johansson and Emma Thompson demanded their release and Mr Ennarah’s British wife Jess Kelly appeared on CNN.

US president-elect Joe Biden’s candidate for secretary of state, Antony Blinken, tweeted that “meeting with foreign diplomats is not a crime. Nor is peacefully advocating for human rights.”

His intervention contrasted with outgoing president Donald Trump’s characterisation of Mr Sisi as his “favourite dictator”, although Mr Sisi is responsible for the most harsh repression the region has seen in decades.

Mr Blinken’s comments demonstrated that Mr Biden is unlikely to adopt a tolerant attitude toward significant human rights violations in Egypt and elsewhere.

The charges levelled against the men were catch-all accusations used to imprison dissidents of all persuasions. “Joining a terrorist organisation” signifies associating with the outlawed Muslim Brotherhood.

Providing information on the state of affairs in Egypt to foreign diplomats, journalists or foreign rights groups directly or via social media is regarded as treachery.

These charges can lead to months or years in pre-trial detention and long terms of imprisonment. It is not clear whether the charges on the three have been dropped.

Amnesty International reported that Egypt executed 57 men and women in October and November, compared with 32 executions during all of 2019.

Some 3,000 people have been condemned to death since Mr Sisi was elected in 2014 compared with 800 over the previous six years. Amnesty called on Egypt to commute death sentences, quash convictions and order fair retrials.

More than 40,000 Egyptians, the majority of them Brotherhood members, have been imprisoned since mid-2013 when the army overthrew elected president Mohamed Morsi.