French European affairs minister Clement Beaune has warned that if a good post-Brexit trade deal cannot be reached between Britain and the EU, France could veto it. Video: Reuters 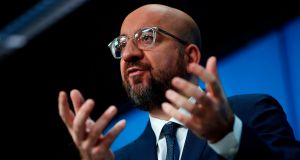 European Council president Charles Michel gestures as he talks during a press conference marking his first year as president at the council headquarters in Brussels, on Friday. Photograph: Francisco Seco/POOL/AFP

A result from talks between the European Union and United Kingdom is expected within hours or days, and if the negotiating teams propose a deal, national governments will have to decide whether or not to accept it based on its merits, a senior EU figure has said.

European Council president Charles Michel, who co-ordinates meetings between member state governments, indicated it was not a given that all member states would accept an agreement that emerged from the talks.

“Member states will need to say yes or no. And if one of the sides of the table says no, then we have a no-deal. And we all know what will be the consequences of no-deal: it will be part of the assessment.”

Member states including France and the Netherlands warned in recent days that a compromise that gave too much away would make a no-deal outcome preferable to an agreement.

An expected briefing of EU member states by chief negotiator Michel Barnier on Friday will not go ahead “due to the ongoing intensive negotiations in London”, a spokesman for the German presidency of the EU said. “Keep your fingers crossed and stay tuned!”

Mr Michel warned that a deal would be conditional on Britain’s full implementation of the withdrawal agreement, including provisions for Northern Ireland designed to avoid a hard border.

It comes after a spokesman for the British government said prime minister Boris Johnson still intended to reintroduce to the Internal Market Bill treaty-breaking clauses that were removed by the House of Lords.

The spokesman also confirmed that the British government would next week introduce a taxation Bill that is expected to include clauses allowing British ministers to determine which goods moving from Britain to the North should be considered at risk of moving into the EU single market and would be subject to tariffs.

Minister for Foreign Affairs Simon Coveney said this week it would not be possible for a deal to be struck if the British government pressed ahead with such a plan, while Mr Michel described it as a “rule of law” issue.