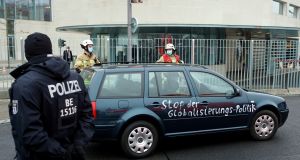 A car in front of the chancellery after it crashed into the front gate of the building housing chancellor Angela Merkel’s offices in Berlin, Germany on Wednesday. Slogan reads ‘stop the globalisation policies’. Photograph: AP Photo/Michael Sohn

Germany has extended its partial lockdown for another three weeks and offered citizens in return a 10-day Christmas amnesty from Covid-19 restrictions until New Year’s Eve.

While the “lockdown lite” has flatted the infection curve, Germany registered 410 deaths linked to the virus on Wednesday, its highest daily rate yet.

“We cannot lose any time,” said Markus Söder, Bavaria’s minister president, ahead of a meeting between chancellor Angela Merkel and regional leaders. “The death numbers are at present as high as if we had a plane crash every day.”

With new daily infections running at nearly 156 per 100,000 of population, German intensive care bed occupation rates have jumped 14 times in the last two months, from 267 at the end of September to 3,781 on Wednesday.

Ahead of the upcoming first Advent weekend, regional and federal leaders have agreed to keep restaurants, bars and gyms closed to at least December 20th and reduce maximum store capacity. Smaller stores with up to 800sq m of floor space will be allowed admit one customer per 10sq m.

The rule has raised concerns about large queues, in particular outside supermarkets, during Christmas shopping.

In addition, fireworks will be banned in large public spaces to avoid large groups of people congregating at close quarters.

Those in high-risk groups will be given easier access to free Covid-19 tests while residents of care homes will each receive 30 quick tests for personal use monthly at no cost to them.

A month before Christmas, German theologian Margot Käßmann suggested the pandemic restrictions offer an opportunity to reflect on the origins of the Christian holiday, “stripped of pressure and kitsch”.

“For me it is the festival of the birth of Jesus,” said Dr Käßmann, former head of Germany’s Lutheran (EKD) church. “Joseph and Mary were not in a large family setting in the origin story so we can perhaps discover this year what Christmas is really about.”

Before Wednesday’s video conference began, Berlin police detained a 54-year-old man who drove his car “at very low speed” into the gates of the chancellery.

The driver is reportedly psychologically disturbed and drove a car into the gate once already, in 2014. This time his VW Golf was covered in confused messages – “You damn children and old-people murderers” and “Stop Globalisation Politics”. Six years ago his messages on the car were “end human-killing climate change” and “I love you Nicole”.

Police guarding the chancellery said they did not believe it was a terrorism-related attack.

A government spokesman said the incident, which took place during the morning cabinet meeting, “at no point represented a danger for the chancellor, the other members of the federal government and the people working in the federal chancellery”.

Differing Covid-19 rates – and restrictions – across Europe’s Alpine region have sparked the first tensions over the looming ski season.

He has backed a call from Italy and France for a pan-EU solution and for the season opening to be postponed until January 10th.