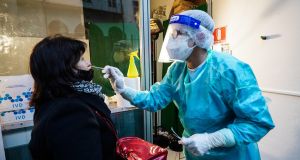 A worker of the university pharmacy carries out a coronavirus antigenic swab test for a fee in Turin, Italy on Thursday. Photograph: Tino Roman/EPA

More than 65 million cases of coronavirus have been recorded worldwide with more than 1.5 million deaths, according to the latest data from Johns Hopkins University.

Italy approved new restrictions on Thursday to avoid a surge in novel coronavirus infections over Christmas and the new year, banning midnight mass and halting movement between towns, as the country posted its highest daily death toll of the pandemic. Prime minister Giuseppe Conte said that from December 21st to January 6th movement between Italy’s 20 regions will only be allowed for work, medical reasons or emergencies. On Christmas Day, St Stephen’s Day and New Year’s Day, Italians cannot even leave their towns. In a televised evening news conference, Mr Conte said current curbs which are staggered around the country according to local infection rates were producing good results, but the Christmas holidays threatened to cause a new spike in cases.

In Italy, the first Western nation to be battered by the virus, more than 58,000 people have died since its outbreak in February, the second highest toll in Europe after Britain. It has also registered 1.665 million cases. An increase in new infections and hospital admissions has slowed in recent weeks, but Italy is still reporting more daily Covid-19 fatalities than any other European nation. On Thursday, 993 people died - Italy’s highest daily toll yet. The previous record was 919 on March 27th at the peak of the first wave of the pandemic. Italy’s regions hit out at the government over the latest restrictions, saying they were not consulted over measures that were too hard on families and did not compensate hard-hit businesses. In a joint statement the regional governments said “the lack of discussion has made it impossible to balance the curbs with the needs of families.”

Spain’s Catalonia region will not relax restrictions as planned because of worsening infection rates, prompting some ski slopes to postpone their opening next week.

France will ensure free vaccinations for all and has earmarked some €1.5 billionof next year’s social security budget to cover the cost.

Moscow will begin giving high-risk workers Covid-19 vaccinations on Saturday after president Vladimir Putin called for authorities to roll out a mass inoculation programme. The first doses will be for teachers, health care workers and city social services employees, Mayor Sergei Sobyanin said on his blog. Russia has the world’s fourth-highest number of cases globally, with almost 2.4 million. On Wednesday, Mr Putin said more than 2 million doses of the Sputnik V vaccine will be ready for use in the coming days.

The US recorded its highest daily number of coronavirus deaths on Wednesday, as the number of people admitted to hospital with Covid exceeded 100,000 for the first time since the pandemic began. According to the Johns Hopkins University tracker, 2,804 new deaths were recorded on Wednesday, nearly the number of people killed in the 9/11 terrorist attacks. The previous high was the 2,607 deaths recorded on 15 April, at the beginning of the pandemic. (Johns Hopkins had earlier reported 3,157 deaths on Wednesday, reportedly due to an error in one state.) The mayor of Los Angeles, the second largest city in the US, with a population of 3.9 million, warned it was nearing a “devastating tipping point” this week, as officials introduced new guidance prohibiting mingling of households. “It’s time to hunker down,” Eric Garcetti said. “It’s time to cancel everything. And if it isn’t essential, don’t do it.” Los Angeles’s restrictions are far from a blanket ban on activity, however, with retail businesses allowed to remain open if they implement a set of protocols, and golf courses, tennis courts and outdoor gyms allowed to remain open. Film and TV production are also allowed to continue. Los Angeles county, which includes Los Angeles and surrounding areas, is home to 10 million people and has recorded 421,881 infections so far. So far 7,782 people have died. Some coronavirus relief programs passed by Congress are due to expire at the end of the year.

New York City’s average number of coronavirus cases and its infection rate hit the highest levels since May, while statewide daily infections closed in on 10,000. New Jersey reported record cases. California will impose a new shelter-at-home order if hospitals start running short of intensive-care capacity. Delaware, reporting record cases, issued a stay-at-home advisory. President-elect Joe Biden said he would ask all Americans to wear a mask to prevent the spread of the coronavirus for the first 100 days of his administration. The latest wave of Covid-19 has inundated the Sun Belt, adding pressure on tourism-dependent cities brutalised by infections and deaths in July and August. Facebook said it will start removing false claims about immunisations that have been debunked by public health experts. Meanwhile, IBM and US officials are sounding the alarm over hackers targeting companies critical to the distribution of vaccines.

South African president Cyril Ramaphosa reimposed several curbs aimed at containing the coronavirus pandemic in one of the nation’s biggest municipalities, which is battling a second wave of infections. A 10 pm to 4am curfew will be reinstated in Nelson Mandela Bay in the south of the country, Ramaphosa said in a televised address on Thursday. Alcohol sales be restricted and the consumption of alcoholic beverages in public spaces will be forbidden. The number of new coronavirus cases in South Africa jumped to 4,400 on Wednesday, the highest since mid-August, Ramaphosa said. Of the 800,872 people diagnosed with the disease in the country so far, 92 per cent have recovered, while 21,803 have died.

South Korea reports 629 new coronavirus cases in 24 hours versus 540 a day earlier, according to data from the Korea Disease Control and Prevention Agency’s website. The number of newly confirmed cases was at the highest since early March.

The Osaka prefectural government raised its virus alert to the highest level after a rise in serious cases put strain on its medical system. Governor Hirofumi Yoshimura, at a news conference late Thursday, urged residents to stay home until December 15th. Schools will remain open but bars and restaurants in certain districts are being asked to close early. Osaka reported 386 new cases Thursday; number of patients with serious conditions rose to 136, meaning two-thirds of hospital beds have been occupied, according to Kyodo.

Indonesia recorded its biggest daily rise in infections on Thursday, with its Covid-19 task force attributing the jump to a lag in some areas reporting cases.

Challenges in Pfizer Inc’s supply chain for the raw materials used in its Covid-19 vaccine played a role in its decision to slash its 2020 production target.

Moderna Inc said it expects to have between 100 million and 125 million doses of its experimental vaccine available globally in the first quarter of 2021.

AstraZeneca and Oxford University have given conflicting accounts of how they came upon the most effective dosing pattern for their vaccine.

Asian shares scaled a record high on Friday on the growing prospect of a large US economic package, while hopes that vaccine rollouts will boost the global economy underpinned investor sentiment.

A bipartisan, $908 billion coronavirus aid plan gained momentum in the US Congress on Thursday as conservative lawmakers expressed their support.

US bankruptcy filings fell last month to their lowest in more than 14 years, a jarring disconnect with a worsening economic outlook as Covid-19 cases surge.

Japan will establish subsidies for regional banks that shore up their core strength through mergers and integration as part of efforts to revive regional economies.– Reuters, Bloomberg, Guardian