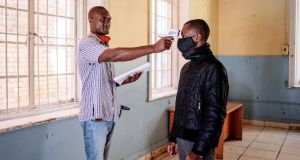 A security officer measures the temperature of a student at the entrance of Albert Street Primary School, in Johannesburg. Photograph: Luca Sola/AFP/Getty Images

South Africa’s government has tightened lockdown restrictions in the Eastern Cape province’s largest city as a first step in tackling localised coronavirus outbreaks that are threatening to spread nationwide.

In a live television address on Thursday, president Cyril Ramaphosa told citizens there was clear evidence of a resurgence of Covid-19 across the Eastern Cape and Western Cape provinces, which urgently needed to be contained.

“There are three areas that account for most new infections. They are Nelson Mandela Bay and the Sarah Baartman District in the Eastern Cape, and the Garden Route District in the Western Cape,” Mr Ramaphosa said.

The Covid-19 flare-ups in both coastal regions could lead to a full-blown second wave of the disease, say medical experts, due to the expected mass movement of people across South Africa’s nine provinces over the festive season.

In addition, the government is concerned people are succumbing to restriction fatigue, even though the country is currently on Level 1 of its five-stage, risk-adjusted lockdown strategy – the least severe.

This has manifested in a growing tendency to ignore social distancing and mask-wearing regulations.

As a result, the Eastern Cape’s Nelson Mandela Bay metro has become the first place to officially be declared a Covid-19 hot spot, which has triggered the introduction of targeted restrictions designed to slow the outbreak while protecting economic activity.

These controls include limiting the sale of alcohol, the introduction of a 10pm- 4am curfew, a ban on alcohol consumption in public places, a reduction – from 250 to 100 – in the number of people who attend indoor events, and a ban on post-funeral gatherings.

Mr Ramaphosa also said his government would create extra capacity at medical facilities in affected areas, as some hospitals and clinics in both provinces were experiencing significant rises in admissions.

Public health interventions such as testing, contact tracing, isolation and quarantine, as well as awareness-raising campaigns, are also being expanded.

“We must change our behaviour to prevent a resurgence of the virus and manage outbreaks wherever they occur . . . At the same time, we need to do all we can to keep the economy open and to push ahead with our reconstruction and recovery effort,” Mr Ramaphosa concluded.

South African business associations have cautiously accepted the government’s needs-based approach to the targeted restrictions, saying it takes into account the realities of people’s lives.

The Business for South Africa organisation had earlier warned that returning the country to a strict Level 3 lockdown would cost the country a further 200,000 jobs.

The first wave of Covid-19 started to peak in South Africa in late June before subsiding in early September. The situation had remained stable since then, with under 2,000 new cases recorded nationwide most days until last month.

By late November the new infection figures had crept up to just under 3,000 per day, while on Thursday 4,400 cases were recorded over the previous 24 hours. This brought the total number of infections recorded in South Africa since March 5th to 800,872, with 21,803 related deaths.

According to department of health officials, more than half of the recent daily increases were driven by infections in the Eastern Cape, and about 25 per cent by cases in the Western Cape.

Since Covid-19 was first recorded in Africa – in Egypt – in early February, South Africa has become the hardest-hit country of the continent’s 54 nations by some distance.

The Africa Centres for Disease Control and Prevention’s latest figures show it has recorded 36.15 per cent of Africa’s 2,215,216 confirmed infections, and 41.27 per cent of its 52,824 recorded Covid-19-related deaths.