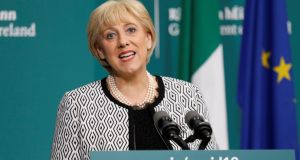 Once again, Fine Gael in particular is demonstrating what is now an almost pathological detachment from the electorate. Picture: Minister for Social Protection, Heather Humphreys TD. Leon Farrell/Photocall Ireland/PA Wire

Let’s put this in the simplest terms: the Pandemic Unemployment Payment (PUP) was put in place to help people survive while their employment was effectively paused because of a global pandemic. Demanding that those same people, who are waiting to go back to work in their profession, must now be “actively seeking work” elsewhere is utterly ridiculous. Yet this idiotic provision, equal parts stupid, equal parts vindictive, passed through the Dáil on Tuesday night, while Sinn Féin’s amendment attempting to remove the punitive instruction in the legislation - a deletion supported by Labour, the Social Democrats, and People Before Profit amongst others - fell.

It is not the fault of workers in industries, workplaces, and areas of employment that has been shut down due to the pandemic, that they are not able to work currently. Yet now they find themselves being told to “get a job”. We’re talking about countless talented professions across multiple sectors who presumably will now feel the breath of Intreo on the back of their necks for simply having the gaul to work in areas that are the most impacted by the pandemic. How is this government decision even logical, never mind fair?

There are, naturally, nuances. There are some workplaces that will not be opening back up because it will not be economically viable for them to work within the public health guidelines. That is extraordinarily tough, and their workers need to be supported. But there are also workplaces - festival sites, nightclubs, theatres, concert halls, venues, film and television sets and studios, and the plethora of workers that orbits them - that cannot open back up because of public health guidelines.

This is not a choice. If you are a highly skilled member of a film crew, and were working on a production that was shutdown by the pandemic, you are waiting for it to start back up. We cannot expect cinematographers, actors, camera-operators, riggers, lighting and set designers, and so on, to chuck in a lifetime of training, skills and expertise, and look for jobs sweeping floors or selling chips. That’s not because those jobs are below those people, but it’s not their profession. They have not lost their jobs. They have not quit their work. They are waiting for their sectors to restart. What part of this does the government not understand? Or do they fully understand it, yet see anyone who doesn’t have a “job” that resides in the seemingly very small realm of their comprehension as a dispensable hobbyist?

Angela Dorgan, who has done a huge amount of work to secure financial support for musicians over the years, and is also the Chair of the National Campaign for the Arts, tweeted, “The PUP is not a handout. It’s a payment to sectors whose industries have been shut down to help the nation stay well and safe during a pandemic. If you force our sector to ‘seek other work’ there won’t be a skilled sector after the pandemic.”

Some will say this decision is simply academic, and that in reality musicians and sommeliers and gig promoters and TV directors and dancers and concert sound engineers and film set caterers and bouncers and whoever else, won’t be hounded about why they haven’t dropped their CV into Lidl. But if the government didn’t intend on pursuing those who are not “actively looking for work” because their industries have shut down, then why isn’t that in the legislation? Surely a sensible addition to the legislation would be to exclude workers in sectors that have shut down due to the pandemic? We can now only hope that such an amendment will be added and passed in the Seanad.

It does feel that there are multiple things informing this epically thick moment for a government quickly becoming known for its incompetence and stupidity. First of all, it demonstrates a complete lack of understanding of the diversity of employment in contemporary Ireland. Politicians and civil servants know all about salaries, sick leave, holiday pay, bonuses, pay rises and pensions. They appear to be completely disconnected from the self-employed, and from people who work project to project. Those make up the guts of the arts and culture and live events sectors, as well as large swathes of the nighttime economy, for example.

Secondly, it’s about denigrating people in certain sectors. It is simply galling to see politicians trumpeting the success of Normal People’s Emmy nominations this week, while simultaneously forcing the same kinds of talented people who work on potential award-winning productions across the sector to look for work elsewhere.

Thirdly, it’s about Austerity Nua. The government seems intent on getting the sectors of society back to work who they perceive were experiencing the “economic recovery” they loved so much before the 2020 election. That’s the “recovery” that was predicated on 10,000 people becoming homeless while it was soaring, apparently. Plenty of people were left behind, and it’s these people who the government is now doubling down on by pushing them further into poverty.

But it’s not just about people who get by on very little now being told to exist on less. Because once again, Fine Gael in particular is demonstrating what is now an almost pathological detachment from the electorate. Even on a superficial, tactical level, do they not understand that vast swathes of people on the PUP are their potential base and voters? Is Fine Gael’s ideological disdain for anyone seeking financial assistance from the State - whatever the circumstance - so visceral that it blinds them to the fact that they are now screwing over their beloved middle-class?

These kinds of punitive actions cause social division. They fan the flames of rage. They tempt civil unrest. They demonise, humiliate, gaslight, and grind down people who have done nothing wrong, who in fact, add greatly to the fabric of our society. At the outset of the crisis, the government assumed the stance of compassion. We now know that was a facade. How terrible. Remember “we’re all in this together”? Talk about being sold a PUP.