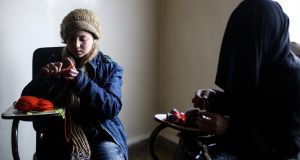 Syrian women attend a wool-weaving class, organised by Nesaa al-Ghouta (Women of Ghouta), in the rebel-held Douma district of Damascus. Concern says the war’s impact on civilians has been “catastrophic”. Photograph: Mohammed Badra/EPA

Less than 25 per cent of the money required for international efforts to protect civilians in Syria has been made available over the past two years, the aid agency Concern has said.

In a new report to coincide with the sixth anniversary of the outbreak of hostilities, the charity noted that in as foreign involvement has increased over the past two years, the fighting has intensified and the impact on civilians has been “catastrophic”.

Protecting civilians had become a major part of the humanitarian response in Syria, with the threat of explosions, forced conscription, harassment and abuse, forced displacement, the spread of disease, and lack of medicines imposing acute hardship on those who remain in the country.

“Access to civilian populations in need and negotiating safe humanitarian space have become more difficult as siege and starvation tactics have become the norm, which is in open violation of international humanitarian law,” according to the report, Shattered Lives.

It also said communities were being systematically deprived of access to much-needed support – a tactic that posed a grave threat to people’s lives.

Despite the scale of the crisis, global funding for civilian protection fell short by $180 million (€171 million) last year.

Citing figures from the United Nations Office for the Co-ordination of Humanitarian Affairs, the report said that of the $236 million required for civilian protection in Syria, only $56.5 million, or 24 per cent, was received. In 2015, these efforts were only 24.3 per cent funded.

Concern called on UN member states and international donors to urgently facilitate humanitarian access and increase their funding for civilian protection on the ground.

Speaking at a launch event in Dublin, chief executive Dominic MacSorley pointed out that Ireland had already provided €70 million towards the Syria crisis response.

“Other much wealthier governments can and must do more, in particular the permanent five Security Council members who hold greater influence and responsibility for the continued conflict,” Mr MacSorley said.

The report, which draws on interviews and focus groups with civilians in northern Syria, also recommends greater access to education to prevent children from joining armed groups; greater focus on psychosocial support for girls and women; and more work to improve the livelihoods of households so that children are not forced to work in hazardous places to support families.