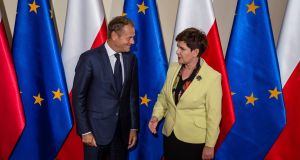 Poland has escalated a campaign to block its former prime minister, Donald Tusk, from winning a second term as European Council president when EU leaders meet in Brussels on Thursday.

On Wednesday, current prime minister Beata Szydlo accused Mr Tusk of backing an attempt “to overthrow the government by means of non-parliamentary methods” by supporting an opposition protest last December.

“President Tusk has failed to demonstrate adequate impartiality. He used his EU function to engage personally in a political dispute in Poland,” Ms Szydlo wrote in a letter to EU leaders ahead of the summit. “We cannot accept such a conduct. We cannot allow for this dangerous precedent to be created.”

Poland has nominated its own candidate, MEP Jacek Saryusz-Wolski, but Mr Tusk appears to have the support of most leaders, including Germany’s Angela Merkel and France’s François Hollande. Britain’s Theresa May and Hungary’s Viktor Orban have praised Mr Tusk in recent days but have not publicly stated that they will vote for him.

Both Ms May’s Conservatives and Mr Orban’s Fidesz share a political group in the European Parliament with Poland’s ruling Law and Justice Party, and the British prime minister will be reluctant to antagonise Poland ahead of Brexit talks. The European Council president is elected by qualified majority voting, so Poland is unable to block Mr Tusk’s reappointment on its own.

Poland’s president, Jaroslaw Kaczynski, has conducted a lengthy feud with Mr Tusk, whom he accuses of being “morally responsible” for the death of his twin brother, Lech Kaczynski. The former president died in a plane crash in Russia in 2010, when Mr Tusk was prime minister, but Polish and Russian investigations have concluded that pilot error caused the crash.

Although Brexit is not on the official agenda for the summit, it is likely to be discussed on Friday, when 27 leaders meet without Ms May to discuss the future of the EU. A Government spokesman said the Taoiseach is likely to meet Ms May in the margins of the summit.

The leaders of the four largest remaining member states – Germany, France, Italy and Spain – this week endorsed the idea of a multispeed Europe, which would allow groups of countries to pursue deeper integration at their own pace.

This is one of five possible scenarios identified last week by commission president Jean-Claude Juncker in a White Paper on the EU’s future. It would allow for countries to move at varying speeds towards integration of policies on issues such as defence, security and taxation.

“We must have the courage to accept that some countries go ahead and can make progress a little faster than others,” Dr Merkel said.

Some member states in central and eastern Europe fear that the idea of a multispeed Europe could undermine EU unity, a concern shared by Mr Tusk. Irish officials are relaxed about the concept, however, pointing out that such variable arrangements are not new and that they would operate within existing EU treaties.