Germany and Turkey in bid to avert diplomatic meltdown

Turkish President Tayyip Erdogan compares Germany's conduct to the Nazi period after political meetings of resident Turks that were due to be addressed by Turkish officials were cancelled in two German cities. Video: Reuters 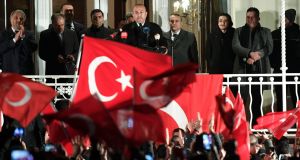 The meeting was “polite in tone but difficult in content” and, afterwards, Gabriel insisted it was a bad idea for “political disputes from Turkey to be imported into Germany”.

“Whoever wants to speak here [in Germany] . . . has to respect the rules: the rule of law and the rules of decorum,” he said in a clear nod to his absent Turkish colleague.

In recent months of German-Turkish relations, decorum has been in increasingly short supply. The strain was palpable last month during chancellor Angela Merkel’s first visit to Ankara since July’s failed military putsch. After talks with Turkish president Recep Tayyip Erdogan, Merkel insisted that “everything must be done” to preserve freedom of speech and democratic opposition.

Turkey’s response: remanding in custody a German-Turkish journalist with the Die Welt daily it accuses of being a spy. Days later, several German local authorities pulled the plug on political events to be attended by Turkish ministers.

On Tuesday night, at a hastily rearranged talk with supporters in Hamburg’s Turkish consulate, Cavusoglu warned Germany: “Do not try to lecture us on human rights and freedom of speech.”

“The situation in Europe reminds us strongly of the second World War,” he said, adjacent to a stand distributing free copies of Turkey’s government-friendly Sabah newspaper, proclaiming: “Germany is back in Hitler times.”

That was an echo of Erdogan’s weekend claim that “Nazi” practices were the reason Turkish ministers were being prevented from speaking in public in Germany.

Furious local authorities in Germany beg to differ. They cancelled the events citing safety concerns, while accusing organisers of tricking them about the events’ real purpose: to drum up support for next month’s constitutional referendum in Turkey aimed at giving Erdogan increased powers. After its decision, one town hall in southwestern Germany was evacuated after a phoned-in bomb scare.

Like others in Europe, Merkel’s government fears a slide into a totalitarianism if Turkish voters follow Erdogan’s wishes next month and back his constitutional reform plan.

Considering how Turkey has imprisoned more than 100,000 opposition politicians, judges, professors, journalists and other critics since last year’s putsch, Berlin officials have been galled by Erdogan’s attacks on Germany for hindering free speech.

But Merkel has put her staff on a tight rhetorical leash, dismissing the Turkish president’s Nazi comparison as “disqualifying itself”.

Behind the scenes, official German annoyance is tempered by a real fear that European retaliation will push away Turkey for good – into other alliances. Berlin is also determined to safeguard the struggling EU refugee swap deal with Turkey. It was backed by Merkel last year as a way to reduce asylum-seeking arrivals into Europe, and her political future hangs on its survival.

But that is increasingly complicated after a recent crackdown on a Turkish umbrella organisation that operates about 900 mosques in Germany, is largely pro-Erdogan and receives funding from Ankara.

After raids last month, prosecutors have opened investigations into 16 individuals, including four imams, accused of providing Ankara with names of community members believed to support Fethullah Gülen, the US-based cleric denounced by Erdogan as the mastermind of last year’s failed coup.

Amid concerns over these close political links, and Nazi comparisons from Ankara, German officials insist – through gritted teeth – that they have “no interest in an escalation” with Turkey. “Merkel is sensationally good at refusing to be drawn, while leaving others an option to row back without losing face,” said Jan Techau, foreign policy analyst at the American Academy in Berlin.

But will Erdogan choose that option? With some opinion polls predicting a tight referendum result next month, Turkey’s foreign minister signalled on Wednesday that the Turkish president will fly to Germany soon for a pre-referendum rally.

Aware it is facing a no-win situation, Berlin is unlikely to intervene to prevent such an appearance.With that, however, Germany will become a key battleground in Turkey’s immediate future and beyond. With about 1.3 million registered Turkish voters, the three million-strong Turkish community in Germany is the fourth-largest constituency after Istanbul, Ankara and Izmir.

Traditionally pro-Erdogan, with 60 per cent backing the president in the last general election, the Turkish-German vote could be crucial in tipping next month’s referendum result.

That result will, in turn, shape the West’s future relations with a key Nato partner and ally in the battle against the Islamic State terror group.