Theresa May defends sacking of Heseltine over Brexit vote 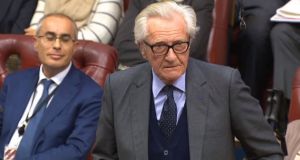 Michael Heseltine: “I believe that the referendum result is the most disastrous peacetime result that we’ve seen in this country.” Photograph: PA Wire

British prime minister Theresa May has defended her sacking of former deputy prime minister Michael Heseltine after the 83-year-old peer voted against the government on legislation authorising the start of formal Brexit negotiations. The prime minister’s official spokesman said Lord Heseltine’s support for an amendment calling for parliament to have the final say on a Brexit deal justified his dismissal.

“Lord Heseltine, who held a number of government advisory positions, voted against the official position of the government. The chief whip in the House of Lords therefore asked him to stand down from those roles. The government would like to warmly thank Lord Heseltine for his service,” the spokesman said.

A lifelong supporter of European integration, Lord Heseltine said on Wednesday that he had been working “three or four days a week” advising the government on industrial strategy and on reviving de-industrialised areas. He said the chief whip told him about his sacking after the Lords voted on the amendment to article 50 legislation but he declined to comment on a suggestion that the move was an effort by the prime minister to intimidate potential Conservative rebels in the House of Commons.

“I’ve never met Theresa May and so I can’t make a judgment. She’s doing very well in the post, public opinion approves of what she is doing, and so I’m not going to get involved in a sort of tit-tat of personalities,” he said.

“My preoccupation has been from the very beginning that I believe that the referendum result is the most disastrous peacetime result that we’ve seen in this country.”

The article 50 authorisation Bill returns to the Commons next week after the Lords backed two amendments, one calling for a meaningful vote on the final Brexit deal and another guaranteeing the rights of European Union citizens now living in Britain. Ms May is determined that the legislation should be passed without amendments, arguing that anything else would undermine her position in negotiations with the EU.

The government is especially worried about the amendment approved on Tuesday night, which would allow MPs and peers to veto a decision by the prime minister to walk away from the talks and leave the EU without a deal. The government argues that such a veto would encourage the EU to offer Britain an unsatisfactory deal, confident that parliament would prevent Ms May from rejecting it.

The Conservatives have a working majority of 17 but seven of the party’s MPs voted for a similar amendment when it came before the Commons. The government can depend on the support of the DUP’s eight MPs, along with six Eurosceptic Labour MPs who have followed the Conservative line on the article 50 Bill.

Lord Heseltine’s sacking could deter other Europhile Conservatives from joining the rebellion or it could embolden them to force the government into giving parliament the final say on Brexit. Some Conservatives suggested on Wednesday that Ms May could avoid a revolt if she offered a reassurance that she would give MPs a meaningful vote on the final deal she agrees with the EU.