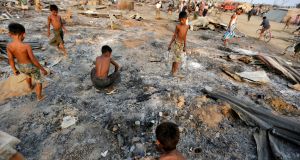 The United Nations said in a report that the army and police in Myanmar had committed mass killings and gang rapes of Rohingya Muslims in northern Rakhine state and burned villages. Photograph: Soe Zeya Tun/Reuters

Myanmar looks set to escape an international investigation into alleged atrocities against its Rohingya minority, after the European Union decided not to seek one at the UN Human Rights Council, a draft resolution showed on Wednesday.

The United Nations said in a report last month that the army and police had committed mass killings and gang rapes of Rohingya Muslims in northern Rakhine state and burned villages in a campaign that may amount to crimes against humanity and ethnic cleansing.

Setting up a full international commission of inquiry into the findings – similar to those for Syria and North Korea – has been seen as a test of international resolve at the main annual session of the council that ends on March 24th.

The draft resolution from the EU suggests it may fail that test. The European Union, which has historically taken the lead on issues relating to Myanmar on the council, takes note of “the very serious nature of the allegations” and “current investigations conducted at the domestic level”.

Zeid, in a renewed appeal on Wednesday, told the council that the severe violations follow “long-standing persecution” of the stateless Rohingya minority in majority-Buddhist Myanmar and warranted a review by the International Criminal Court.

“I therefore urge the council, at minimum, to establish a Commission of Inquiry into the violence against the Rohingya, particularly during security operations since 9th October 2016,” he said.

Some 70,000 people have fled Rakhine state to Bangladesh since Myanmar’s military began a security operation last October in response to what it says was an attack by Rohingya insurgents on border posts in which nine police officers were killed.

The EU draft calls for the UN special rapporteur on Myanmar, Yanghee Lee, backed by Zeid’s office, to investigate “allegations of gross human rights violations by military and security forces” and try to “ensure full accountability for perpetrators”.

But human rights monitors have voiced serious doubts that several investigative commissions set up by the Aung San Suu Kyi government and its security forces had the tools and independence needed for an impartial investigation.

“Our research indicates that it [the abuse] is systematic, and the idea that the government could or would be able to participate in a proper investigation of what is going on simply isn’t realistic,” said Louis Charbonneau of Human Rights Watch.

“An investigation needs to be independent, credible and international.”