British prime minister tells MPs ‘difficult choices’ had been made 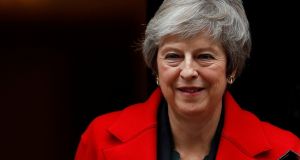 Theresa May leaves 10 Downing Street, to make a statement in the House of Commons on Thursday. Photograph: Peter Nicholl/Reuers

Theresa May has insisted the UK has clinched a bespoke Brexit deal that is better than any other model, but admitted that “difficult choices” had been made, which triggered the exit of cabinet ministers Dominic Raab and Esther McVey.

In a plea to MPs to back her, she said that delivering the deal was “in the national interest” and that any move by MPs to block the deal would take negotiators “back to square one, more uncertainty, more division”.

“The British people want us to get this done,” Mrs May said. “To get on with addressing the other issues they care about. The choice is clear, we can choose to leave with no deal, we can risk no Brexit at all, or we can choose to unite and support the best deal that can be negotiated.”

Mrs May told the Commons she respected the views of the two cabinet ministers who quit on Thursday morning and said they had differences of opinion. Two other key cabinet Brexiteers, Penny Mordaunt and Andrea Leadsom, who had been said to have serious reservations, were sitting beside her on the government benches.

Mrs May said her deal “delivers in ways that many said simply could not be done”.

She said: “We were told that we had a binary choice between the model of Norway or the model of Canada, that we could not have a bespoke deal. But the outline political declaration sets out an arrangement that is better for our country than both of these.”

In the speech, Mr May defended her “insurance policy” of a backstop to prevent a hard border between Northern Ireland and the Republic.

“I do not pretend that this has been a comfortable process, or that either we or the EU are entirely happy with all of the arrangements that have been included within it. But of course this is the case,” she said. “This is an arrangement that we have both said we never want to have to use.

“But while some people might pretend otherwise, there is no deal which delivers the Brexit deal the British people voted for which does not involve this insurance policy.”

Mrs May said it would ensure the UK leaves “in a smooth and orderly way”, to peals of laughter from MPs in the House of Commons. She said many had told her there was “no blueprint for Brexit” and others had questioned whether separation was even possible.

She said Brexit had forced the UK to “confront some very difficult issues” but said that “a good Brexit, in the national interest”, was possible. “We have persevered and made a decisive breakthrough,” she said.

Responding to Mrs May, Jeremy Corbyn said the deal was “a huge and damaging failure”. The Labour party leader said: “After two years of bungled negotiations the government has produced a botched deal that breaches the prime minister’s own red lines and does not meet our six tests.

“The government is in chaos. Their deal risks leaving the country in an indefinite halfway house without a real say.”

He cited the departure of Mr Raab as Brexit secretary over a deal he had negotiated. Mr Corbyn said: “What faith does that give anyone else, in this place or in the country?”

He called for the government’s legal advice on the risks of a no-deal Brexit to be published, saying: “We cannot put to parliament this half-baked deal that both the Brexit secretary and his predecessor had reject.

The DUP’s deputy leader Nigel Dodds criticised Ms May over her deal’s handling of Northern Ireland. He told MPs: “I could today stand here and take the prime minister through the list of promises and pledges she made to this house and to us, privately, about the future of Northern Ireland in the future relationship with the EU.