‘My approach throughout has been to put the national interest first’ 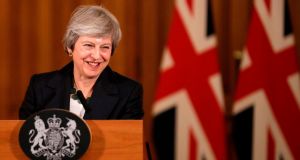 Britain’s prime minister Theresa May battled against a rebellion over her draft Brexit deal on Thursday, as ministers resigned and members of her own party plotted to oust her. Photograph: AFP

Theresa May has defended the draft withdrawal agreement as the best way to deliver Brexit, telling a press conference in Downing Street that the European Union would not agree to any deal that did not include a Northern Ireland backstop. The prime minister was speaking after two cabinet ministers, including Brexit secretary Dominic Raab, and two junior ministers resigned because they could not support the agreement.

“My approach throughout has been to put the national interest first. Not a partisan interest. And certainly not my own political interest. I do not judge harshly those of my colleagues who seek to do the same but who reach a different conclusion. They must do what they believe to be right, just as I do. I am sorry that they have chosen to leave the government and I thank them for their service. But I believe with every fibre of my being that the course I have set out is the right one for our country and all our people,” she said.

Mr Raab, who was appointed Brexit secretary last July after David Davis resigned, cited the specific measures for Northern Ireland under a backstop to guarantee no return to a hard Border. In a letter to the prime minister, he said the indefinite nature of the backstop, from which Britain could not withdraw unilaterally, made it unacceptable.

“I believe that the regulatory regime proposed for Northern Ireland presents a very real threat to the integrity of the United Kingdom. Second, I cannot support an indefinite backstop arrangement, where the EU holds a veto over our ability to exit. The terms of the backstop amount to a hybrid of the EU Customs Union and Single Market obligations. No democratic nation ever signed up to be bound by such an extensive regime, imposed externally without any democratic control over the laws to be applied, nor the ability to decide to exit the arrangement,” he said.

Mr Raab’s resignation was followed by that of Work and Pensions secretary Esther McVey, who had called for a vote on the Brexit deal at Wednesday night’s cabinet meeting. Junior Brexit minister Suella Braverman and junior Northern Ireland minister Shailesh Vara also resigned.

Environment secretary Michael Gove was reported to have rejected Mrs May’s request to succeed Mr Raab as Brexit secretary, telling her he would only do so if he could seek to renegotiate the withdrawal agreement.

In the House of Commons on Thursday morning, the prime minister faced three hours of questions on the Brexit deal, with most MPs expressing dissatisfaction. Jacob Rees-Mogg, who chairs the European Research Group (ERG) of Conservative Brexiteers, wrote a letter to 1922 Committee chairman Graham Brady expressing no confidence in the prime minister.

If he receives 48 such letters, Sir Graham must call a confidence vote in Mrs May’s leadership but Mr Rees-Mogg said he was not launching a coup against the prime minister.

“A coup is when you use illegitimate procedures to try and overturn somebody who is in office, this is working through the procedures of the Conservative Party. It is therefore entirely constitutional and . . . coup is the wrong word,” he said.

“What we need is a leader who will say to the EU ‘it is impossible to divide up the UK, it is impossible to agree to a situation where we have a perpetual customs union, it’s impossible to pay £39 billion of taxpayers money for a few promises which was meant to be £39 billion for an implementation of a deal, and it is impossible for us to allow the continuing jurisdiction of the European Court of Justice’. The problem is the negotiations have given away on all the key points.”

Labour leader Jeremy Corbyn wrote to party members on Thursday night telling them that the government was falling apart and was incapable of delivering a Brexit deal. He said that Labour would not accept a choice between Mrs May’s deal and a no-deal Brexit and would seek a general election. If that was impossible, the party would consider all options, including a second referendum.

“If parliament votes down this shambolic Tory deal – as seems likely – this will represent a loss of confidence in the government. In those circumstances, the best outcome for the country is an immediate general election that can sweep the Tories from power and deliver the Labour government this country desperately needs. If we cannot get a general election, in line with our conference policy, we will support all options remaining on the table, including campaigning for a public vote,” he said.

Court orders South Africa to amend its coronavirus lockdown regulations 15:52
Johnson defends coronavirus response as UK’s death toll passes 50,000 14:00
Khartoum massacre a year on: ‘If I told them I was a doctor I wouldn’t be talking now’ 13:44
Coronavirus: UK deaths surpass 50,000 as Italians allowed travel to other regions 13:15
Mumbai escapes brunt of cyclone after winds change direction 12:55