At least one dead amid fresh protests in Iraq 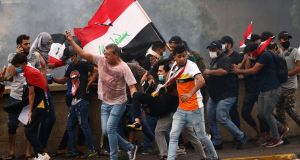 A protester struck in the face by a tear gas canister died in Baghdad on Friday as Iraqi security forces sought to repel demonstrators protesting at corruption and economic hardship, police and medical sources said.

The authorities have struggled to address protesters’ grievances since sporadically violent unrest erupted in Baghdad on October 1st, before spreading to southern cities. Demonstrators blame corrupt officials and political elites for failing to improve their lives.

At least one protester has died and more than 200 were wounded in the latest disturbances.

The unrest has posed the biggest challenge to prime minister Adel Abdul Mahdi since he took office just one year ago. Despite promising reforms and a broad cabinet reshuffle, the premier has so far struggled to address protesters’ roiling discontent.

Despite the Opec member country’s vast oil wealth, many Iraqis live in poverty, have limited access to clean water, electricity, basic healthcare or decent education as the country tries to recover from years of conflict and economic hardship.

In an address late on Thursday night, Mr Abdul Mahdi warned that any collapse of government would drag Iraq into further turmoil.

How the government and security forces will handle further protests is a litmus test for the stability of the country, with political leaders already on edge.

“Our demands are the resignation of the entire government, the dissolution of all political parties, a good life. We came here in a peaceful protest for this,” said Mahmoud al-Shummari (51), one of thousands who gathered in Baghdad’s Tahrir Square.

Hundreds of people, some of whom had camped overnight in the square, made attempts throughout the morning to march towards the city’s fortified Green Zone, which houses government buildings and foreign embassies, as security forces attempted to stop them.

The country’s top cleric, Grand Ayatollah Ali al-Sistani, who in recent weeks has criticised the government’s handling of the protests, urged calm on all sides during his sermon on Friday.

Protesters in Baghdad were nervous about a repeat of violent confrontations which engulfed the capital and southern provinces just two weeks ago, leaving 149 protesters dead and more than 6,000 wounded.

“We got to the Green Zone early this morning,” said 28-year-old protester Hussein al-Ojaili. “But we were worried about going past the Iranian embassy because someone said they have snipers.”

One protester was killed after he was struck in the face with a tear gas canister, police and medical sources told Reuters.

The violence further enflamed protesters, who blame a political elite they view as endemically corrupt for failing to improve their lives.

“All we want are four things: jobs, water, electricity, and safety. That’s all we want,” said 16-year-old Ali Mohammed.

Mr Mohammed had covered his face with a T-shirt to avoid inhaling tear gas, as scenes of chaos overwhelmed Tahrir Square. Sirens wailed and tear gas canisters landed in the middle of groups of young protesters who wore Iraqi flags and chanted “With life and blood we defend you Iraq”.

Tuk-tuks carried injured protesters to nearby hospitals for treatment. Medical sources told Reuters at least 227 people had been treated for injuries, most related to tear gas exposure.

A damning report released this week by a government committee set up by Mr Abdul Mahdi concluded the 149 civilians were killed because security forces used excessive force and live fire to quell the protests. – Reuters