Johnson offer of more time never had chance of being accepted 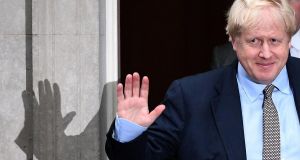 British prime minister Boris Johnson: it is in his interest to have his Brexit deal ratified before going to the country on December 12th. Photograph: Andy Rain

Boris Johnson’s offer to MPs of more time to debate his Withdrawal Agreement Bill (WAB) if they vote for a December general election was already a dead letter minutes after he made it. Under the Fixed-Term Parliaments Act, the prime minister needs a two-thirds majority in the House of Commons for an early election and opposition parties made clear they would not co-operate.

If MPs were to play along, Johnson would go to the country on December 12th either with his Brexit deal ratified or after parliament had once again frustrated his effort to take Britain out of the EU. If the European Council follows the pattern of the extension it gave Theresa May last April, it will delay Brexit until January 31st but agree that if the deal is ratified earlier Britain can leave the EU on the first day of the following month.

Under Johnson’s proposed timetable for the WAB, it would have its final vote on November 6th. If it passed, Britain would be able to leave on December 1st, 11 days ahead of the election.

The Scottish National Party’s leader, Scotland’s first minister Nicola Sturgeon, left nobody in any doubt about her party’s intentions.

“So Johnson appears to be saying to MPs ‘if you vote for an election, I’ll bring back my bad Brexit Bill and try to drag us out of the EU before we go to the polls’. Elections should be exercises in letting voters decide, not devices for charlatans to get their own way,” she said.

Plaid Cymru and the Greens quickly followed suit and Liberal Democrat leader said her party was “not in the business of bailing out Boris Johnson”. Labour’s shadow Commons leader Valerie Vaz was more cryptic, saying her party would back an election once a no-deal Brexit was ruled out and “if the extension allows”.

Labour is divided over the merits of an early election, with Jeremy Corbyn and his inner circle enthusiastic but most MPs reluctant to face the voters in December. The party will abstain on Johnson’s motion on Monday but whips have told MPs that they are free to vote against it.

If Johnson fails to win a two-thirds majority for an election next Monday, he will have to decide how to proceed with the WAB. Downing Street sources were threatening on Thursday night that the government would effectively go on strike, doing nothing except pushing for an election every day.

But it is in Johnson’s interest to have his Brexit deal ratified before going to the country, so that he can tell voters he has delivered on his promise to take Britain out of the EU – even if he has missed the October 31st deadline. The risk he faces is that, although the WAB passed its second reading this week with the help of 19 Labour MPs, many of them voted for it so they could amend it to commit the government to a softer Brexit, including a customs union with the EU.

Johnson’s gambit will help to throw up a smokescreen to divert attention from his failure to meet the October 31st deadline. But after MPs reject his general election motion on Monday, he will be back where he started – as an impatient prime minister at the mercy of a parliament that is in no hurry to do his bidding.