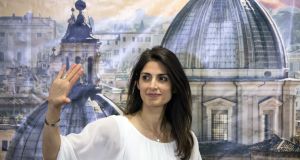 Virginia Raggi, Rome’s mayor, mocked the strikers as a ‘minority of trade unionists who are trying to hold hostage a city of 3 million residents’. Photograph: Alessia Pierdomenico/Bloomberg

Rome’s mayor accused trade unions of holding the city “hostage” as public services grounded to a halt on Friday due to a general strike over the poor management of the Italian capital.

Hundreds of staff from 18 civic firms gathered at Piazza del Campidoglio, home to Rome’s council, to call on Virginia Raggi, who was elected mayor in June 2016, to resign.

“Rome doesn’t deserve to be governed in this way,” said Alberto Civica from the UIL labour union.

Rubbish went uncollected and buses, trains and trams were disrupted in what the Italian media has dubbed Rome’s “Black Friday”. The industrial action affected schools, museums and social services. There were strikes nationwide, with Alitalia cancelling 240 flights, but Rome was the hardest hit.

Ms Raggi, Rome’s first female mayor, mocked the strikers as a “minority of trade unionists who are trying to hold hostage a city of 3 million residents”.

She tweeted: “They are workers, mothers and fathers who take their children to school every day, students and commuters. Most citizens are tired of unjustified strikes.”

But Rome’s citizens, who are planning what has been described as a “passive march” against Ms Raggi’s administration on Saturday, are also tired of the shoddy state of the city, from the overflowing bins, pot-holed streets and monuments scarred with graffiti, to the unkempt parks and increasingly dysfunctional transport system. More than 20 buses have caught fire since the beginning of the year due to poor maintenance.

“Rome has got much worse in recent years,” said Daniela Lucadelli, who was born in the city. “There’s rubbish on the streets, which attracts rats and wild boar ... this is the capital of Italy, as well as an open museum, it needs to have money invested in it and to be treated with respect.”

Giorgio Robustelli, a member of the Filcams CGIL labour union, said: “I’ve come to protest against the degradation of Rome ... the city has more difficulties than it used to.”

Ms Raggi often blames the city’s ills on the decades of inefficiency and corruption that engulfed previous administrations. By the time she took office, Rome was saddled with some €13 billion of debt.

Ms Raggi, who was cleared by a Rome court of allegations of cronyism and abuse of power last November, has so far resisted calls to resign. But with rival political parties organising petitions to get her to quit before the next mayoral elections in 2021, her future is uncertain .

“The mayor has offended people with her arrogant words,” said Bruno Astorre, secretary for the Democratic party in the Lazio region. “Striking is an absolute right. Rome is blocked today because of Raggi’s bad governance, not because of exasperated workers.”

Saturday’s march along the river Tiber comes a year after thousands of residents protested outside the local authority to decry the city’s scruffy condition, attracting headlines across the world. Ms Raggi dismissed the protesters as “people from the Democratic party with designer handbags and poodles”. – Guardian