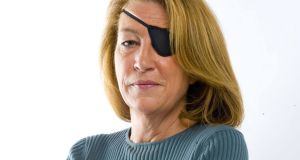 Journalist Marie Colvin was killed “in a targeted rocket attack” on a makeshift media centre in the rebel-held city of Homs, the court papers allege. Photograph: Reuters/Sunday Times

The Assad regime “assassinated” the Sunday Times correspondent Marie Colvin as part of its campaign targeting journalists covering the Syrian civil war, according to a claim filed in a Washington court on Monday.

The legal action over the 2012 killing is the first war crimes-related case against the Syrian government to reach court. It includes evidence from high-placed defectors who testify that reporters were tracked via their satellite phone signals.

Colvin, an American reporter who operated out of London, and Remi Ochlik, a French photographer, were killed “in a targeted rocket attack” on a makeshift media centre in the rebel-held city of Homs, the papers allege.

“On February 22nd, 2012,” the claim maintains, Colvin, “hailed by many of her peers as the greatest war correspondent of her generation, was assassinated by government forces of the Syrian Arab Republic as she reported on the suffering of civilians in [the district of ] Baba Amr”.

It adds: “This deliberate, malicious conduct by the regime was undertaken in blatant violation of established rules of international law, and constitutes an extrajudicial killing.”

Lawyers for the Colvin family are relying on the Foreign Sovereign Immunities Act, which allows claimants to sue foreign countries through the US courts for compensation and punitive damages.

The claim has been brought by Colvin’s sister Cathleen. Extrajudicial killing is defined in US law by reference to international war crimes legislation.

Some of the testimony has been given by a Syrian intelligence defector, codenamed Ulysses. He reveals in court documents that senior regime officials celebrated after confirming Colvin’s death. One senior officer allegedly declared: “Marie Colvin was a dog and now she’s dead. Let the Americans help her now.”

Another series of intelligence reports allege that Major General Rafiq Shahadah received wiretapped information on a phone call between an activist in Homs and an Al-Jazeera news presenter. The information, it is claimed, was sent to army units with instructions to “take the necessary measures”.

The US court can consider the evidence submitted on paper without conducting any further hearings. In that case, it could issue a judgment within the next few months. The Syrian government has declined to engage with the US courts over the claim.

Two years ago president Bashar al-Assad said in a television interview that Colvin was responsible for her own death because she had entered the country illegally and was working with “terrorists”.