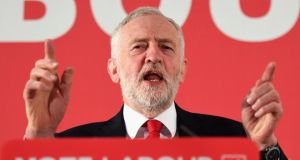 The British Labour Party has accused Theresa May’s government of failing to protect communities by cutting public services and reducing police numbers amid a rise in violent crime.

Launching his party’s campaign for local elections on May 3rd, Jeremy Corbyn linked the Conservatives’ spending cuts to a recent succession of fatal stabbings in London, where more than 50 people have died in violent attacks since the start of the year.

“Young people with their lives ahead of them are being ripped from our communities. Too many families are facing the loss of a child they have nurtured in their early years, never to see the potential of that love and support realised. As political leaders we must act. We have to tackle full-on the reasons so many of our young people are having their lives extinguished,” he said.

“You cannot protect local communities when you cut funding to local councils to such an extent they are unable to provide the essential youth-service support that stops many young people being drawn into violent crime.”

Alarm about the rise in violent crime has cast a spotlight on the Conservatives’ record on policing and the funding of community services in recent years. The home secretary, Amber Rudd, admitted on Monday that she had not read a report prepared by her own officials that said a cut in police numbers “likely contributed” to the rise in violent crime.

“I think it is a mistake, and we do a disservice to the communities and the families who have seen these tragedies by just pointing to police numbers. This is a complex area. It is not all about police numbers,” she told the BBC. “I haven’t seen this document. There are a lot of documents that go round the home office. We do a lot of work in this area. You cannot arrest your way out of this. What we need is what we are proposing in the serious violent crime strategy, which is about early intervention. One of the things that we have learnt from this report is that forces with the biggest falls in numbers have not seen the biggest rise in crime.”

Ms Rudd on Monday unveiled a raft of measures aimed at reducing violent crime, including putting pressure on social-media companies to take down content celebrating violence or perpetuating gang feuds. The home office believes that half the rise in robbery, knife and gun crime is explained by better police recording. Rising crack-cocaine use is blamed for fuelling gangs and violent disputes between them.

Mr Corbyn will on Tuesday host a “round table” on violent crime, which will include victims of knife crime. He said on Monday that Theresa May’s government could not escape responsibility for the rise in crime. “The Tory record on policing and crime is one of reckless failure. Plain and simple: you can’t have security on the cheap, and cuts have consequences. Too many communities are living with those consequences.”