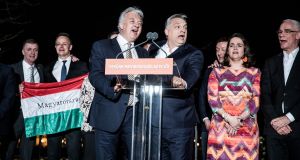 Hungary’s government is set to continue its battle with the European Union over migration and with liberal civil society groups at home, after prime minister Viktor Orban and his Fidesz party demolished rivals in a parliamentary election.

As Mr Orban planned for a third consecutive term in office with a two-thirds “supermajority” in parliament – allowing his government to change Hungary’s constitution – congratulations poured in from like-minded anti-immigration and Eurosceptic politicians.

“We want to call out what’s ailing this continent,” Mr Orban said after Fidesz took 49 per cent of votes for party lists and most single-seat constituencies – which under a system the party created translates into 133 of the 199 seats in parliament.

Mr Orban says his priority is preventing refugees and migrants being resettled in Hungary, under a plan he claims was devised by liberal philanthropist George Soros and is being implemented by the European Union and United Nations.

The supposed threat to the security and identity of Hungary and Europe posed by Muslim immigrants was the focus of Fidesz’s campaign, along with conspiracy theories about Mr Soros and the powerful network he allegedly controls.

Hungarian foreign minister Peter Szijjarto said that after Fidesz’s big victory on near-record turnout of 69 per cent “nobody can question the level of public support that the Hungarian government has within the field of migration policy”.

Mr Orban’s victory was welcomed by Poland’s leaders, with whom he has formed an alliance to fend off the threat of EU sanctions over both countries’ refusal to accept refugees and reforms that allegedly undermine the rule of law.

In France, National Front leader Marine Le Pen said in a congratulatory tweet: “A big and clear victory for Viktor Orban in Hungary: the change of values and the mass immigration extolled by the EU have again been rejected.”

A spokesman for German chancellor Angela Merkel said she had congratulated Mr Orban, but he noted that “there are also controversial issues in our co-operation, the different stances in migration policy come to mind”.

Highlighting divisions that cut across European politics and through some governments, however, German interior minister Horst Seehofer said he was “happy” with Mr Orban’s win and urged the EU to be more “reasonable” with Hungary.

“I have always considered it wrong – this policy of arrogance and condescension in regard to individual member states,” he said before a meeting of his CSU party, which are much closer to Mr Orban than are Dr Merkel’s Christian Democrats.

A spokesman for European Commission president Jean-Claude Juncker said he would “discuss issues of common interest” with Mr Orban on Tuesday, while Luxembourg’s foreign minister Jean Asselborn spoke for many liberals in demanding swift and tough action against Budapest.

“After these elections in Hungary, it is for Germany and France – and all member states that are not indifferent – to get involved, quickly and unambiguously, on the basis of the European treaty and neutralise this tumour of values,” he said.

“Today it’s Hungary and Poland, tomorrow other eastern and central European countries – or even one of the EU’s larger founding countries – could indulge in the decomposition of values and scaremongering,” he told Germany’s Die Welt.

In Budapest, Fidesz officials said deputies would soon push ahead with a controversial “Stop Soros” Bill that could see NGOs that “support migration” being banned on national security grounds.

Janos Halasz, the head of Fidesz parliamentary group, said the Bill could come up for debate soon after deputies reconvene later this month.

Gauri van Gulik, Amnesty International’s director for Europe, vowed that the group would “resist the rollback of human rights in Hungary for, and with, all the people and groups who fight for everybody’s rights and freedoms”.

“We will not be cowed by those who attempt to muzzle Hungary’s critical voices and to create an atmosphere of fear.”

Monitors from the Organisation for Security and Co-operation in Europe raised concerns over the election, reporting “pervasive overlap between state and ruling party resources, undermining contestants’ ability to compete on an equal basis”.