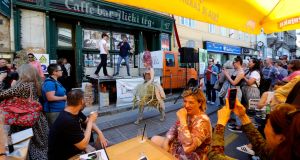 People sit at a cafe bar on the main street Ilica during a street art festival in downtown Zagreb, Croatia, on June 7th. Photograph: Antonio Bat/EPA

Croatia says tens of thousands of foreign tourists are already in the country after it kick-started its economically vital holiday season ahead of other popular summer destinations that have been hit harder by coronavirus.

Tourism officials said on Friday that 92,000 people were now on holiday in Croatia, including some 66,500 foreign citizens, according to data from hotels and other accommodation.

“At the moment, Croatia is de facto the only [country] in the EU with tourism. We have crowds at the borders,” Zagreb’s interior minister Davor Bozinovic said this week, adding that strict hygiene measures were in place at resorts.

“I am sure it is in everyone’s interest to adhere to them as much as possible, and that is a guarantee that we will be as successful this [holiday] season as we have been in [fighting the virus] over the last three months.”

Croatia relies on tourism for about one fifth of its gross domestic product and attracted more than 18 million foreign holidaymakers in 2019, but the government has warned that visitor numbers could fall by 70 per cent this year.

The Adriatic state kept its coronavirus outbreak under control, reporting 2,249 cases and 107 deaths, and on May 28th announced that people from 10 EU states could visit without restrictions.

Citizens of other countries, including Ireland, currently have to prove the reason for their visit to Croatia, but that condition could be dropped next week as part of a broad relaxation of border controls across much of the EU.

Greece plans from Monday to reopen for tourists flying in from airports that are not on the European Aviation Safety Agency (EASA) list of high-risk areas for coronavirus, with only random tests for the virus being conducted among arrivals.

No airport on the island of Ireland is on the list – but the official advice from the Government is that non-essential overseas travel should be avoided.

Thirteen British airports are on the EASA list, and anyone arriving in Greece from those points will be tested for the virus and obliged to spend one or two weeks in quarantine, depending on whether their result is negative or positive.

Greece is expected to drop most of its remaining travel restrictions on July 1st, in part to help a tourist industry that generates about 20 per cent of its economic output. Greece has reported 3,088 cases of coronavirus and 183 deaths.

Poland will reopen its borders to citizens of all EU countries on Saturday, and allow international flights to resume next Tuesday, having announced that it was over the worst of a coronavirus outbreak that has infected 28,577 people and killed 1,222.

Neighbouring Czech Republic and Slovakia have already lifted most lockdown and travel restrictions, having won praise for their effective handling of the coronavirus crisis.