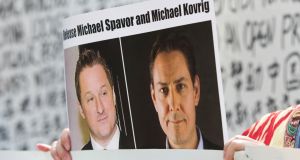 Chinese prosecutors have charged two Canadians for alleged espionage after 557 days of interrogation and incarceration in a case widely described as an example of Chinese “hostage diplomacy”.

China has denied any link between the two cases, but international legal experts have referred to the arrest of the Canadians as “hostage diplomacy”, and a retaliatory strike by Beijing aimed at pressuring Canada to release the Huawei executive, who is the eldest daughter of Huawei founder Ren Zhengfei.

In brief statements posted on Friday, Chinese highest prosecutor’s office said that Mr Kovrig had been indicted in Beijing on charges of espionage and gathering state secrets and intelligence for foreign countries. Mr Spavor was charged in Dandong, a city close to the North Korean border, with spying for a foreign entity and illegally providing state secrets.

If convicted of the charges the pair could face years in prison, and given that China’s Communist Party-controlled judicial system has a conviction rate in excess of 99 per cent, an acquittal is unlikely.

The charges come just weeks after a Canadian judge ruled the US extradition case again Ms Meng could proceed to the next phase. The US wants Ms Meng extradited to face trial on charges related to Huawei’s alleged violations of American sanctions against Iran.

China’s foreign ministry recently called her arrest a “purely political case”, and accused Ottawa of being an American “accomplice”, warning there would be “grave consequences”.

Since Ms Meng’s arrest Beijing has blocked Canadian exports of canola oil and other agricultural produce, key elements of their trade with China.

Ms Meng has been released on bail while her case proceeds, and she is living in one of her two Vancouver mansions.

The Canadians have been held in detention centres for the past 18 months, where they have been kept in cells under 24-hour florescent lighting. They have been denied access to lawyers or family members, and recent reports said they had been interrogated for between six to eight hours a day.

Canadian embassy officials had been allowed a 30-minute visit each month, but that access has been cut off since January when the coronavirus outbreak emerged in China.

The US has urged Canada and other countries to exclude Huawei from their 5G wireless networks, citing security concerns and the telecoms supplier’s links to the Chinese military.

Beijing rejects the claims, and accuses Washington of trying to destroy Huawei and suppress China’s economic and technological development.