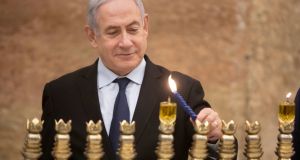 Israeli prime minister Binyamin Netanyahu is facing the most serious challenge to his grip on power in the ruling Likud party since he returned as party leader in 2005.

Gideon Sa’ar, a former education and interior minister, stood against Mr Netanyahu in a party leadership primary on Thursday claiming he was the only candidate who could guarantee the right-wing remains in power after the March election, Israel’s third inside a year. Although mr Sa’ar has only an outside chance of victory, Mr Netanyahu took the challenge seriously, spending the last few weeks on the campaign trial, attending three rallies a day.

A rocket was fired from Gaza at the southern city of Ashkelon as Mr Netanyahu spoke at his last rally of the campaign on Wednesday night, forcing him to rush to a protected space. After returning to the stage, he said Hamas and Islamic Jihad did not want him to win the Likud primary or the Knesset elections, but vowed that would happen despite them.

The polls show that the Likud led by Netanyahu would win more Knesset seats in the upcoming election than if Mr Sa’ar was the leader, but Mr Sa’ar, critically, would increase the overall size of the right-wing/religious bloc.

Mr Netanyahu faces charges of bribery, fraud and breach of trust in three separate corruption affairs and opposition politicians have vowed not to sit with Netanyahu in a government unless he clears his name in court. Israel’s longest-serving prime minister denies the charges, claiming he is the victim of a left-wing witch hunt.

Praising Mr Netanyahu while calling for a change in leadership, Mr Sa’ar said that Netanyahu “brought us to power four times, but the writing is on the wall. There won’t be a fifth time”. He argued that Netanyahu has already failed twice in the last year to form a government and will be unable to persuade anyone outside the right-religious bloc to join him in government. “A vote for me will ensure Likud rule and the formation of a new government headed by us,” Saar told supporters. “A vote for Mr Netanyahu is a vote for the next head of the opposition.”

Mr Sa’ar has been preparing for this primary contest for a long time and remains a popular figure in the party. Anything close to 40 per cent of the vote or above will be considered a success for Mr Sa’ar and, in any event, he is likely to emerge from the primary contest as the favourite to lead the party in the post-Netanyahu era.

In an attempt to win over Likud activists, Mr Sa’ar pledged this week to work to get Mr Netanyahu elected as Israel’s next president if he becomes the next prime minister. The Likud is an extremely loyal party having had only four leaders in 46 years and has never unseated its elected leader. It will become clear on Friday morning if Gideon Sa’ar has succeeded in breaking that mould in what would be a political bombshell.