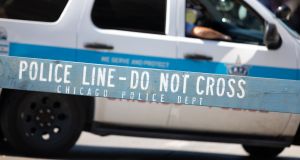 The shooting occurred just after 12:30am in the Englewood neighbourhood at the party, which was being held “in memorial of a subject slain in April,” said Fred Waller, chief of patrol for the Chicago Police Department.

He said authorities were still investigating any link between the April killing and Sunday’s shooting. Two people were being questioned in connection with Sunday’s shooting, said Mr Waller. He said he did not believe the shooting was gang related and that it was likely an “isolated incident” stemming from a “personal dispute”. He said the victims had “various gunshot wounds to their bodies”. The youngest was a 16-year-old, he said, and the oldest about 48. He added that four people were injured critically and the rest were stable. Mr Waller said surveillance footage captured part of the shooting, which took place on the 5700 block of South May Street. After gunshots were fired during a dispute inside the home, people began spilling outside, and two gunmen fired on the crowd, he said.

“It looked like they were just shooting randomly at people as they exited the party,” he said.

Alderman Stephanie D Coleman, who represents the neighbourhood, said she had gone to the scene after hearing about the shooting from constituents.

“I saw disappointment, I saw frustration, I saw, oh gosh, fear,” she said. “I saw lots of concerned neighbours getting to the bottom of it.”

Chicago has long struggled with gun violence. In one weekend in August, for example, seven people were killed and 52 wounded by gunfire. In October, a seven-year-old girl dressed as a bumblebee was shot while trick-or-treating with her family on Halloween.

Shootings overall, however, are down this year compared with last. The Chicago Tribune, which tracks the number of shooting victims in the city, said 2,594 people had been shot as of December 14th, 248 fewer than in 2018. – New York Times