UK always welcome back in EU after Brexit, says Timmermans 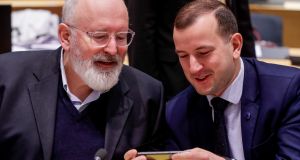 Britain has been unnecessarily damaged by Brexit and “more will follow”, the vice-president of the European Commission has written in a “love letter” to the British people in which he promises a warm welcome back should attitudes change.

Frans Timmermans, who is Ursula von der Leyen’s deputy in her role as European Commission president, writes that British scepticism of the EU had been an asset to the bloc as he expresses his own feelings of rejection ahead of the country’s impending departure on January 31st, likening himself to a jilted “old lover".

Writing in the Guardian, Mr Timmermans, a former Dutch foreign minister who was also deputy to Jean-Claude Juncker, says he first grew to love the UK and the character of its people through his time at a British school in Rome, Saint George’s English School.

The British doubts over the European project had offered a healthy check on the more federalist ambitions of figures through the decades, he suggests in his article. He writes: “I know you now. And I love you. For who you are and what you gave me. I’m like an old lover.

“I know your strengths and your weaknesses. I know you can be generous but also miserly. I know you believe yourself to be unique and different. And of course you are in many ways, but perhaps less than you think.”

“You will never stop referring to the rest of us as ‘the continent’,” Mr Timmermans adds of the British attitude through the decades to EU membership. “It helps you to create a distance you think you need. But it also prevents you from seeing that in fact we all need a bit of distance between us. All European nations are unique. Our differences are a source of admiration, surprise, discomfort, misunderstanding, ridicule, caricature and, yes, love.”

Negotiations on the future relationship will start in earnest in March once the UK has formally withdrawn and negotiating positions on both sides of the channel have been confirmed.

Boris Johnson has said he will not extend the transition period, during which the UK will remain in the customs union and single market but not the EU’s decision-making institutions, beyond December 2020.

Clashes are expected over access to British waters for European fishing fleets and, more significantly, the EU demand that the British government sign up to its environmental, social and fiscal rules in return for tariff-free trade in goods.

Mr Timmermans talks of his grief at the unpicking of the relationship built since the UK’s accession to the European economic community in 1973. He suggests that David Cameron’s decision to hold the 2016 referendum was unnecessary.

“Was it necessary to force the issue? Not at all. But you did. And the sad thing is: I see it is hurting you. Because the two minds will still be there, even after you have left. In the process, so much unnecessary damage has been done to you and all of us. And I fear more will follow.”

Mr Timmermans concludes, however, that the UK “will always be welcome to come back”. – Guardian