Trump ready to ‘deal’ with any North Korean Christmas gift 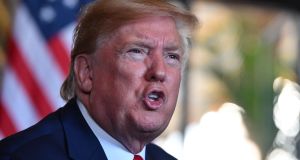 President Donald Trump has brushed off North Korea’s warning of a “Christmas gift”, saying the United States would “deal with it very successfully”

Speaking to reports at his Mar-a-Lago resort in Florida, Mr Trump said Kim Jong Un’s comments might lead to him getting a “nice present”.

“We’ll find out what the surprise is and we’ll deal with it very successfully,” Mr Trump said.

North Korea warned Washington earlier this month of a possible “Christmas gift” after its leader Kim Jong Un gave the United States until the end of the year to propose new concessions in talks over his country’s nuclear arsenal and reducing tensions between the two long-time adversaries.

In issuing the warning on December 3rd, North Korea accused Washington of trying to drag out denuclearisation talks ahead of the US residential election next year and said it was “entirely up to the U.S. what Christmas gift it will select to get.”

Us military commanders have said that the North Korean response could involve the testing of a long-range missile, something North Korea has suspended, along with nuclear bomb tests, since 2017.

Mr Trump has repeatedly held up the suspension of such tests as evidence that his policy of engaging with North Korea, which has involved unprecedented summits with Mr Kim , was working.

Nuclear talks between the US and North Korea have been stalled since a February summit between Mr Trump and Mr Kim Un fell apart.

Earlier this month, North Korea carried out two major tests at its long-range rocket launch and missile engine testing site in the country’s northwest. Experts believe it tested a new engine for either an inter-continental ballistic missile or a satellite launch vehicle.A new satellite image of a factory where North Korea makes military equipment used to launch long-range missiles shows the construction of a new building.

The release of several images from Planet Labs comes amid concern that North Korea could launch a rocket or missile as it seeks concessions in stalled nuclear negotiations with the United States.

One of the satellite images taken on December 19 shows the completion of a new structure at the March 16 Factory near Pyongyang, where North Korea is believed to be developing and manufacturing vehicles used as mobile launchers for long-range ballistic missiles.

Jeffrey Lewis, director of the East Asia nonproliferation program at the Middlebury Institute, said the construction seemed to be an expansion of the factory, which would be “big news”.