Incoming president of Peru under pressure to quit 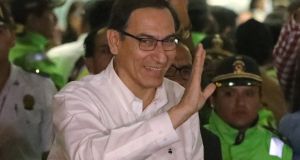 Having seen one president resign on Wednesday, Peru ended the week with his successor already under pressure to quit as the political crisis gripping the country for months showed no sign of abating.

Vice-president Martín Vizcarra arrived in the capital, Lima, in the early hours of Friday and was due to be sworn in as president even as his predecessor threatened to withdraw his resignation and resume office.

President Pedro Pablo Kuczynski stepped down after evidence emerged that he had bought the votes necessary to defeat efforts in congress to impeach him last December. But when legislators threatened to pass a resolution labelling him a “traitor to the homeland”, Mr Kuczynski took to social media to say he would withdraw his resignation and insist they formally remove him.

Mr Vizcarra was due to assume office with little popular or political support. He had been sent into political exile by Mr Kuczynski, who made him ambassador to Canada after he was caught up in a corruption scandal involving the construction of a new airport in the former Inca capital of Cusco.

‘Kick them all out’

Earlier this month it was reported public prosecutors had dropped the case against him “for lack of sufficient evidence”. Before his return to Peru, demonstrators took to the streets to protest against the country’s entire political class, many holding signs saying “Kick them all out”.

The left-wing New Peru party has demanded new elections but Peru’s main parties, all mired to varying degrees in corruption, are opposed to facing the electorate given the unstable political climate.

In a bid to shore up support, Mr Vizcarra has reportedly promised other parties he will replace the country’s prime minister as a first step to forming a broad-based consensus administration. Under the constitution, he is due to complete Mr Kuczynski’s term which runs until July 2021.

The crisis in Peru is the latest chapter in the international corruption scandal involving Brazilian construction giant Odebrecht, itself an offshoot of Brazil’s Car Wash mega-probe into illegal links between politicians and private contractors.

Mr Kuczynski’s predecessor, Ollanta Humala, is in jail awaiting trial in the Odebrecht affair while another former president, Alejandro Toledo, is fighting extradition from the US after Peruvian prosecutors accused him of accepting bribes from the Brazilian company.

Mr Kuczynski survived December’s impeachment vote over payments he received from Odebrecht but looked set to lose a second one on Thursday that was pre-empted by his resignation. That followed the release of a video that seemed to show the son of the country’s former dictator, Alberto Fujimori, offering legislators kickbacks in return for voting down December’s impeachment effort.

After surviving that vote, Mr Kuczynski pardoned Mr Fujimori on health grounds. He had been serving a 25-year sentence for corruption and human rights abuses committed during his decade-long dictatorship.