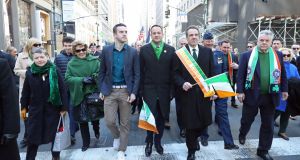 Taoiseach Leo Varadkar has said that he is proud to walk in the St Patrick’s Day parade in New York on Saturday alongside his partner Matt, as he made his final engagement of his week-long trip to the United States.

Speaking in New York after his attendance at the annual mayor’s breakfast, Mr Varadkar said he had nothing further to add on the Doonbeg controversy, though he confirmed that he did not have any contact with Donald Trump after his email to Failte Ireland.

It emerged on Saturday that Fáilte Ireland raised concerns about a wind farm opposed by Mr Trump six months after the then minister for tourism Leo Varadkar passed on the billionaire’s objections about the project. Planning records show the State tourism agency’s submission to the council on September 17th, 2014, mentioned the importance of Mr Trump’s resort to tourism in the area and argued the proliferation of wind farms in west Clare would “detract” from tourism.

The St Patrick’s Day Parade, now in its 257th year, has had a difficult relationship with the gay community. New York Mayor Bill de Blasio boycotted the parade until 2016 when, after decades of campaigning, groups including the Lavender and Green alliance, were permitted to march under their own banner.

Earlier in the day, Mayor de Blasio declared March 17th in the city of New York as “Gerry Adams Day” as he honoured the former Sinn Féin leader as a man who has “truly left his mark on history.”

Speaking at a St Patrick’s Day breakfast in the mayor’s residence in Manhattan where he welcomed Mr Varadkar, Mr DeBlasio said that “history will remember Gerry Adams for being one of the people who did something truly heroic and truly revolutionary.. [HE]found a path of peace.. so many are alive today because of that.”

Presenting the annual award to Mr Adams, Mr De Blasio also praised Mr Adams’ struggle for a united Ireland, saying: “He understood there was no place in this world for colonialism.. great ideas never die. I want to congratulate his for pursuit of a goal that makes so much sense - a United Ireland.”

Mr Adams thanked the Irish in new York for their support, telling the assembled guests: “I look forward to that support continuing in the time ahead as we secure and win a referendum on Irish unity.”

Introducing the Taoiseach, Mr DeBlasio highlighted Mr Varadkar’s own personal story, and congratulated the Irish people for voting in favour of marriage equality.

Mr Varadkar highlighted the links between American and Ireland during his speech.

Last night the Taoiseach visited the Stonewall National Monument in Greenwich Village, which marks the Stonewall riots of 1969 - a key moment in the struggle for gay rights in America.

US vice president Mike Pence has invited Taoiseach Leo Varadkar and his partner Matt to visit his home, during a meeting at his official residence yesterday morning.

The meeting had been highly anticipated given Mr Pence’s previous stance on gay rights and opposition to gay marriage.

Mr Pence said it was an “honour” to host Mr Varadkar. “This is a great moment for us, and a very special moment.”