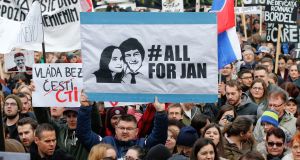 People celebrate the resignation of the prime minister, Robert Fico, and his government, during a rally in Bratislava, Slovakia, last week. Photograph: Darko Vojinovic/AP Photo

Slovak president Andrej Kiska has approved nominations for a new government, delivering a breakthrough in a political crisis triggered by the murder of an investigative reporter and his girlfriend.

Mr Kiska accepted a rejigged ministerial line-up suggested by premier-designate Peter Pellegrini on Wednesday, a day after rejecting a proposed cabinet over concerns that it would not ensure an impartial investigation into the murders and the suspected corruption revealed by journalist Jan Kuciak before he was killed.

“The government of Mr Pellegrini will now seek to win a confidence vote in parliament,” Mr Kiska said.

“But even more importantly, it will need to fight for the public’s trust. In today’s tense atmosphere it will be a difficult task,” he added, while noting that he was not entirely satisfied with the proposed cabinet.

Kuciak and his girlfriend, Martina Kusnirova, were shot dead at his home in a village outside the Slovak capital, Bratislava. The discovery of their bodies on February 25th provoked public outrage that led to the resignation of long-serving prime minister Robert Fico and his interior minister, Robert Kalinak.

In a last, unfinished article that was published after his death, Kuciak (27) investigated links between an adviser to Mr Fico and an ally in the ruling Smer party and a businessman suspected of ties to the Calabria-based ‘Ndrangheta crime group.

Tens of thousands of people have rallied across Slovakia on the last three Fridays to call for a new government, snap elections and a full inquiry into the double murder and the murky dealings uncovered by Kuciak.

After meeting Mr Kiska on Tuesday, protest organisers announced another round of protests for this Friday, but dropped their call for immediate elections while still demanding “a new, trustworthy government”.

It was not immediately clear whether the cabinet nominations approved by Mr Kiska would satisfy young critics of the Smer party who have formed the backbone of the biggest street protests even seen in independent Slovakia.

Mr Kiska said he would formally appoint Mr Pellegrini and his cabinet on Thursday. With 79 of the 150 seats in Slovakia’s parliament, the Smer-led ruling coalition should be able to approve the new government without difficulty.

“Slovakia can’t be without a legitimate government, which has a parliamentary majority, for a few weeks or even months,” said Mr Pellegrini, who is a close Smer party ally of Mr Fico, Slovakia’s premier for 10 of the last 12 years.

Many Slovaks are concerned that Mr Fico will use his power as ruling party chief to control the new government and run Slovakia from behind the scenes, as Jaroslaw Kaczynski does in Poland and Liviu Dragnea in Romania.

When he reluctantly stepped down last week and nominated Mr Pellegrini to replace him, Mr Fico pledged to be “an active party leader” who would “have the new prime minister’s back and push for priorities that are important for Smer”.

No arrests have been made over the double murder, and protesters are demanding the involvement of international experts in the investigation.