Australian rescuers were racing against time to save 15 short-finned pilot whales after more than 100 of the migrating mammals beached on the country's west coast. Video: Reuters 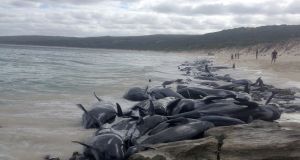 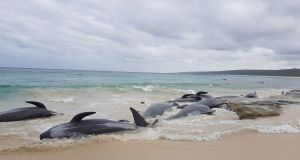 More than 130 whales died after becoming stranded on a beach in Western Australia on Friday.

Locals attempted to rescue 15 survivors after more than 150 washed up on shore at Hamelin Bay.

They are believed to be short-finned pilot whales, and a shark warning was issued.

The stranded animals were first spotted by a fisherman early on Friday morning.

As of Friday afternoon, only 15 whales were alive, and a rescue operation was under way to try to herd them back to sea.

The authorities said palliative care would be administered where necessary.

The biggest mass stranding of whales in Western Australia happened in 1996, when 320 long-finned pilot whales beached themselves. – AP