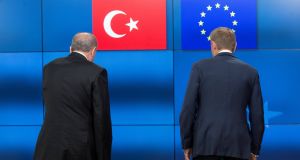 But, gentle, Brexit-sated reader, before you avert your jaded eyes, may I quickly add that we are speaking here, though not in the pubs, of the Turkish customs union, and of that country’s on/off relationship with the EU and accession to, which has been, notionally anyway, an aspiration shared on both sides since 1963.

For the EU this has been a long-standing strategic objective – to anchor regional power Turkey politically in the European orbit, consolidating a trading relationship that sees 41 per cent of its overall trade, as well as two-thirds of its foreign direct investment, tied to the EU.

That’s not a unanimous aspiration. France and Germany have particular problems with the prospect of a further opening of their doors to Turkish migrants, and French president Emmanuel Macron did not pull his punches when President Recep Tayyip Erdogan visited Paris last week.

He told him bluntly that Turkey has no foreseeable chance of joining the EU, simply confirming what everyone in this town has long known. Whenever the EU dares to talk about enlargement these days,the focus is exclusively on the western Balkans agreement.

Erdogan’s authoritarian methods have been a convenient excuse for long-fingering accession discussions, although the need to safeguard the agreement with Ankara on keeping and looking after Syrian refugees in return for dollops of EU cash has seen the union play down its criticism of the Turkish leader.

Recognising that membership is going nowhere fast, some business groups are advocating instead an upgrading of the customs union agreement

Turkey is hosting some 3.5 million displaced Syrians who have fled the war in their country since 2011, and has repeatedly accused the EU of not honouring quickly enough its financial promises, amounting to €6 billion, for the refugees. Part of the deal was a promise by the EU to press forward with a visa-free travel deal giving Turkish citizen s free access to the union. Erdogan will press for that to be activated during the upcoming EU-Turkey summit in Bulgaria’s Black Sea resort of Varna in March.

Ankara insists that it has now met the 72 requirements for the visa scheme approval – that includes a legal provision to reassure civil rights advocates that will soon be added to its anti-terror law stating that “any critical expression that does not exceed the boundaries of journalism does not constitute a crime”.

And then there is the customs union – no, I had not forgotten. Turkey signed up to a customs union with the EU back in 1996, a first very tentative step, it was assured, on the road to membership.

Recognising that membership is going nowhere fast, some business groups are advocating instead an upgrading of the customs union agreement, or even a new partnership in the form of a free trade agreement. Germany’s foreign minister, Sigmar Gabriel, even suggested, echoing Macron, that the Brexit trade deal being negotiated with the UK could serve as a model for Turkey. There is no escaping Brexit.

The annual bilateral value of the trade in goods between Turkey and the EU now stands at €140 billion. Turkey receives almost 5 per cent of exports from the EU, ranking it as the fourth-largest importer from the EU – just below the US, China, and Switzerland.

Turkey’s customs union agreement, which excludes agricultural products, services and access to the state procurement market, provides for a common external tariff for the products covered and requires Turkey to align its regulatory standards in the areas covered.

The fact that Turkey has been unhappy since then at its inability to sign up to separate trade agreements with third countries, and is a receiver of regulations over which it has no control, has not gone unnoticed by the Brexit negotiators who have ruled out any Turkish-like agreement. Ankara has also been subject to the rulings of the European Court of Justice, despite not having a judge on the court.

Until recently, Turkey’s argument for upgrading the customs union stemmed from the likelihood of the US-EU Transatlantic Trade and Investment Partnership – since collapsed by Trump. Ankara wanted to avoid US goods entering Turkey tariff-free and Turkish goods continuing to face tariffs in the world’s largest economy.

Business commentators argue that a new customs union or free trade deal with the EU which encompassed areas left out by the old one could be of considerable benefit to both the EU and Turkey.

Meanwhile, according to a January poll from MetrPOLL, a majority of Turks (52 per cent) now say that “Turkey should not be a member of EU”. More than 70 per cent favoured accession 10 years ago. If the EU does seriously want to anchor Turkey in its ambit, it does appear to be losing the battle for hearts and minds.