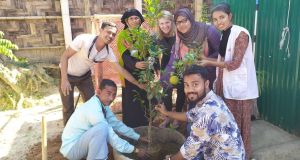 Jennifer Collins and MSF staff plant a tree within the MSF clinic to promote reforestation, as part of a wider initiative within the Kutupalong camp, Bangladesh.

Many Irish members of Médecins Sans Frontières (MSF), Doctors Without Borders, did not make it home for Christmas, but they see it as a part of the choice they made when they signed up to work with the humanitarian charity.

Jennifer Collins from Arklow, Co Wicklow, spent her third Christmas away from family, this time in Bangladesh where she works as a nurse with international humanitarian agency.

The previous two years she was in South Africa and South Sudan. “I am actually completely a Christmas person so it’s the time I miss being home most,” she admits.

“It’s a choice you make to come to these sort of places where there are more risks than normal.”

Collins says she knew from the age of 17 that she wanted to become a nurse and that she wanted to work for MSF. She had already signed up as a volunteer before she had finished her Leaving Certificate. “After that I was certain it was what I wanted to do.

“I became a nurse to work for MSF instead of the other way round which is often the case.”

Since MSF opened an office in Ireland in 2006 more than 220 field staff have been sent from Ireland to help provide emergency healthcare.

When Conor Moran is at home in Knocknacarra in Galway City he and his family always head to Salthill for a bracing swim on Christmas Day. This year Conor is in the Democratic Republic of Congo (DRC) where he works as a “flying doctor” with MSF.

Christmas Day was spent with his colleagues at the MSF base in Kimbi where they shared a communal meal and exchanged small gifts before playing board games. The following day it was back to work covering HIV and TB clinics and hospitals around the South Kivu region.

“The title of ‘flying’ HIV/TB doctor is a bit of a misnomer, it really just means ‘mobile’ as opposed to some of the other positions which are based in one area or project,” he explains.

“I ‘fly’ between different clinics and hospitals around South Kivu. However, most of the time these movements involve plain old jeeps, boats and sometimes a small plane.”

Drogheda native Eve Robinson says “since medical training I always thought I would work with MSF someday” and last September she was appointed to a post in the Central African Republic .

“As an epidemiologist, my role is to help the team understand the health problems in the areas we work so as we can adjust our services to have the biggest impact. We analyse data from our clinics and hospitals regularly to see what illnesses people are coming in with.

This was her first Christmas not to be at home with her family. For December 25th, a dinner was arranged with international staff bringing different dishes from their home countries, while some seasonal films were cued up for viewing including Love Actually.

“From time to time you feel lonely, and also you miss the routines of your normal life,” she says. “But I am lucky that I have made some good friends here who help make life in work, and after work, more enjoyable.”