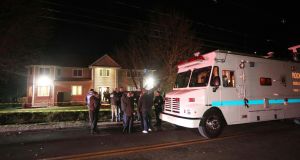 Police work the scene of a residence in Monsey, New York, following a stabbing Saturday during a Hanukkah celebration. Photograph: Seth Harrison/The Journal News via AP

An intruder with a large knife burst into the home of a Hasidic rabbi in a New York suburb on Saturday night, stabbing and wounding five people just as they were gathering to light candles for Hanukkah, officials and a witness said.

It was a terrifying scene, the officials and witness reported, saying that the violence occurred at about 10pm as numerous people were celebrating Hanukkah at the home of the rabbi, Chaim Rottenberg, in Monsey, which is in an area with a large population of ultra-Orthodox Jews.

Governor Andrew Cuomo, visiting the rabbi’s home on Sunday morning, called the attack an “act of domestic terrorism”. The New York Police Department said a suspect had been arrested in Harlem and was turned over to authorities in Rockland County, which is northwest of New York City and where the attack took place. The suspect, Grafton Thomas (38) who is from Greenwood Lake, New York, near Monsey, will face five counts of attempted murder and one count of first-degree burglary, according to the police. Two of the victims remained in the hospital as of Sunday morning, the police said.

Authorities did not immediately disclose any information about the suspect’s background or whether he knew the victims. Officials initially identified him as Thomas Grafton.

A witness, Aron Kohn (65) who said he was in the rabbi’s home at the time, recalled that the rabbi was near the Hanukkah candles when the intruder stormed in.

“I was praying for my life,” Mr Kohn said. “He started attacking people right away as soon as he came in the door. We didn’t have time to react at all.

“We saw him pull a knife out of a case. It was about the size of a broomstick.”

Mr Kohn said that after the attacker fled, he tried to enter a synagogue next door, Congregation Netzach Yisroel, which is led by Rabbi Rottenberg. But people inside the synagogue apparently heard screams from the rabbi’s home and, fearful, locked the door so the attacker could not get in, Mr Kohn said.

Michael B Specht, town supervisor for Ramapo, which includes Monsey, said the suspect had been arrested in New York City in the 32nd precinct, which covers Harlem. Harlem is about 50km away from Monsey.

“Obviously, there’s been a history in the region of violent attacks upon the Orthodox community,” Mr Specht said. “This is something very nightmarish to have happen in our town.”

Yossi Gestetner, a co-founder of the Orthodox Jewish Public Affairs Council, a group that covers New York and New Jersey, said one of the victims was the rabbi’s son. “The house had many dozens of people in there,” Mr Gestetner said in a phone interview. “It was a Hanukkah celebration.”

Peggy Green, a Monsey resident who is Jewish, said she was at the Evergreen Kosher Market at around 10pm when she heard that there had been a stabbing nearby on Forshay Road. Ms Green said the market, which is usually open until midnight on Saturdays and was busy with people shopping for Hanukkah parties, closed early. Ms Green, who lives nearby, said she tried to drive near the rabbi’s home but found Forshay Road blocked off by a long line of ambulances and police cars. “It’s very scary,” she said, of being Jewish in Rockland County, adding that she thinks synagogues should have more armed security.

“Law enforcement in Rockland will leave no stone unturned as they bring those guilty of this crime to swift and severe justice,” Mr Day said in a statement. Mr Cuomo said he had ordered the State Police hate crimes task force to investigate the stabbings. The attack came after a surge in anti-Semitic violence in the New York region. On Friday, the police in New York City stepped up patrols in three Brooklyn neighbourhoods after what officials called an “alarming” increase in incidents.

US president Donald Trump called it a horrific attack. “We must all come together to fight, confront, and eradicate the evil scourge of anti-Semitism,” Mr Trump wrote on Twitter.

Rockland County, a collection of five towns northwest of New York City, has more than 300,000 people. About 31 per cent of the population is Jewish, according to the state, and the county has one of the largest concentrations of ultra-Orthodox Jews in the country.

The ultra-Orthodox population has surged in recent years as Hasidic families from Queens and Brooklyn, priced out of their neighbourhoods, moved to the suburbs.

“The community is terrified,” said Evan Bernstein, the New York regional director of the Anti-Defamation League, who was at the crime scene in Monsey on Saturday night. “They are very, very scared.” Orthodox Jews in Monsey were already rattled by recent assaults against Jews that took place in the last week in Brooklyn, as well as a deadly anti-Semitic shooting at a kosher market in Jersey City this month, he said. Three people, two of them Orthodox Jews, were killed at the market, which was at the centre of a growing Hasidic Jewish community in Jersey City. Officials later declared the attack an act of domestic terrorism and said it was fuelled by the assailants’ anti-Semitic beliefs. – New York Times