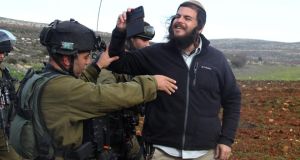 Israeli soldiers prepare to remove an armed Jewish settler as he tries to stop Palestinian farmers (unseen) from ploughing their fields near the West Bank village of Jaloud, near Nablus. Photograph: EPA/Alaa Badarneh

The European Parliament voted to recognise the statehood of Palestine “in principle” yesterday, despite the reservations of a large bloc of European People’s Party (EPP) MEPs.

The vote, which was carried by 498 votes to 88 with 111 abstentions, took place yesterday afternoon in Strasbourg amid sharp divisions among the political groups on the issue.

On Tuesday it appeared that the Parliament would stop short of considering the motion and instead vote on a more general compromise resolution. In the end the parliament voted to “support in principle recognition of Palestinian statehood and the two-state solution, and believes these should go hand in hand with the development of peace talks, which should be advanced.”

Following the vote, the head of the European Parliament’s foreign affairs committee, German centre-right MEP Elmar Brok, said the vote did not indicate an unconditional recognition of a Palestinian state. “With this vote, the European Parliament has clearly rejected an unconditional recognition separate from the peace negotiations,” he said. But MEPs from the centre-left group welcomed the vote as a historic move.

“Finally, after years of harsh debate, we can clearly say the European Parliament supports the recognition of the State of Palestine. This resolution, most importantly, stressed the overwhelming conviction in Europe that the time has come to solve the Israeli-Palestinian conflict through the two-state solution based on the 1967 borders.”

The vote was taken hours after the EU General Court effectively ordered the removal of the Palestinian group Hamas from a terrorist blacklist. The Luxembourg Court ruled that the EU’s decision to place Hamas on a list of terrorist groups was based on “factual imputations derived from the press and internet”. It gave the European Union a stay of three months during which the asset freezes would continue, pending a possible appeal.

Hamas, which was outlawed by the EU Council in 2001, lodged an appeal with the EU General Court this year.

In a statement, the European Commission said the court’s decision had been based “on procedural grounds” and “does not imply any assessment by the Court of the substantive reasons for the designation of Hamas as a terrorist organisation”.

It said restrictive measures against Hamas remain in place “in case of an appeal”.

“The EU institutions are studying carefully the ruling and will decide on the options open to them. They will, in due course, take appropriate remedial action, including any eventual appeal to the ruling.”

Israel reacted immediately to the Court ruling. “We are not satisfied by the explanation offered by the Europeans that the removal of Hamas from the list of terrorist organizations is due to a procedural issue,” Israeli prime minister Benyamin Netanyahu said. “The burden of proof is on the European Union and we expect them to immediately return Hamas to the list that everyone knows it belongs on.”

In a statement following the vote yesterday the European Parliament said it reiterated “its strong support for the two-state solution on the basis of the 1967 borders, with Jerusalem as the capital of both states”.

MEPs also said they condemn “in the strongest terms”, all acts of terrorism or violence.