Protesters in nightly rallies say Serbia is sliding towards authoritarianism 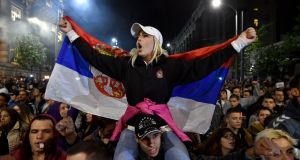 A protester waves the Serbian flag in front of the government building in Belgrade on Wednesday night. In a sign of growing ambition, protesters in the northern city of Novi Sad issued a list of demands. Photograph: Andrej Isakovic/AFP/Getty Images

Serbia’s president-elect Aleksandar Vucic is facing an unexpected challenge from thousands of protesters who accuse him of leading the country towards authoritarianism.

His victory celebrations have been clouded by protests in Belgrade and other cities each evening this week, with frustrated young Serbs making up the vast majority of marchers.

They organise their rallies through social networks, insist they are not linked to any party or politician, and demand a total overhaul of what they call corrupt political, business and media systems that serve an elite led by Mr Vucic.

A former ultra-nationalist who has served as a conservative prime minister since 2014, Mr Vucic has played down the importance of the protests. Pro-government media, meanwhile, initially gave them little attention and now suggest they may be backed by opposition figures, foreign powers or liberal financier and philanthropist George Soros – the billionaire bête noire of populists across the region.

“We’re a democratic country and everyone has the right to be happy or unhappy because of the election results. Imagine if I were to call on all my supporters to go and celebrate,” Mr Vucic said.

“Those who have the time, it’s always fine that they protest as long as it’s peaceful,” Serbia’s B92 news service quoted him as saying.

Interior minister Nebojsa Stefanovic linked the rallies to Sasa Jankovic, the former civil rights ombudsman who came second in the presidential election with 16 per cent and ex-foreign minister Vuk Jeremic, who came fourth with 5.7 per cent.

“They are all organised by [Jankovic and Jeremic]. Only they don’t appear in person, so as not to make it look like a political thing,” Mr Stefanovic said.

Many protesters say they voted for the liberal Mr Jankovic, who ran as an independent, or for the third-placed Luka Maksimovic, a comedy candidate who parodied Serbia’s populist politicians by making outlandish promises and mounting crass publicity stunts.

The demonstrators insist they are not guided by any politician or party however, and they co-ordinate via Facebook pages with names like “Protest protiv diktature” (Protest against corruption).

In a sign of growing organisation and ambition, on Wednesday night student protesters in the northern city of Novi Sad issued a list of demands.

They called for the dismissal of Serbia’s electoral commission, media regulator and senior figures at the state television broadcaster, for their alleged abject failure to ensure free and fair conditions for the presidential election.

The students also demanded the removal of parliamentary speaker Maja Gojkovic – a Vucic ally who is accused of trying to silence opposition voices by adjourning parliament early before the election – and an overhaul of electoral rolls that are believed to include the names of many ineligible voters.

“We think the election was rigged. State workers were blackmailed to vote for Vucic and he got so much more coverage in the media than his opponents. It wasn’t fair,” said Isidora Vitorovic (20), a philosophy student at the University of Belgrade.

“Most of the protesters are young people, who don’t believe in any politicians and don’t watch state television. Instead, they get information and organise online. People are angry – it’s time for the end of the regime.”

Her friend and fellow philosophy student, Nikolina Radojcic, called the peaceful protests “the beginning of a revolution”.

“I don’t think it will happen right now, but this is not just about elections – we need to change the whole system.”