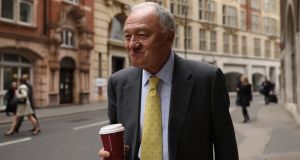 Former Labour mayor of London Ken Kivingstone, who faces a new inquiry by his party into remarks he has made about Hitler and Zionism. Photograph: Dan Kitwood/Getty Images

British prime minister Theresa May has accused Labour of betraying Britain’s Jewish community by failing to expel Ken Livingstone from the party for suggesting that Adolf Hitler once supported Zionism.

Launching the Conservatives’ local elections campaign in Nottinghamshire, Ms May said the decision showed how far Labour had strayed from the centre ground of British politics.

“A Labour Party totally out of touch with the concerns of the British people, which ignores the priorities of local communities and instead indulges its own ideological obsessions. A Labour Party which just this week revealed the depths to which it has now sunk, betraying the Jewish community in our country by letting Ken Livingstone off the hook. It could not be clearer that the Labour Party is now a long way away from the common, centre ground of British politics today,” she said.

Labour leader Jeremy Corbyn has ordered a new inquiry into the former London mayor’s remarks about Hitler and Zionism after a disciplinary hearing suspended him from the party for a further year. Mr Livingstone was suspended last year after he said in a radio interview that Hitler had supported Zionism “before he went mad and ended up killing six million Jews”.

More than 100 Labour MPs have protested against the decision not to expel him, amid reports of the resignation of many Jewish members from the party. Mr Livingstone has refused to apologise for his original claim and after this week’s suspension, he sought to justify it by referring to the Ha’avara Agreement, signed by the Nazi government and the Zionist Federation of Germany, which facilitated the relocation of some Jews to Palestine in 1933.

“He didn’t just sign the deal. The SS set up training camps so that German Jews who were going to go there could be trained to cope with a very different sort of country when they got there. When the Zionist movement asked, would the Nazi government stop a Jewish rabbi doing their sermons in Yiddish and make them do it in Hebrew, he agreed to that,” he said.

“He passed a law saying the Zionist flag and the swastika were the only flags that could be flown in Germany. An awful lot. Of course, they started selling Mauser pistols to the underground Jewish army. So you had right up until the start of the second world war real collaboration.”

Mr Corbyn has asked Labour’s national executive committee to conduct an inquiry into Mr Livingstone’s latest remarks, which he described as grossly insensitive.

“It is deeply disappointing that, despite his long record of standing up to racism, Ken has failed to acknowledge or apologise for the hurt he has caused. Many people are understandably upset that he has continued to make offensive remarks which could open him to further disciplinary action,” the Labour leader said.

“Since initiating the disciplinary process, I have not interfered with it and respect the independence of the party’s disciplinary bodies. But Ken’s subsequent comments and actions will now be considered by the national executive committee after representations from party members.”