Up to 4.8m unauthorised migrants in Europe in 2017, study shows

Rate of increase has levelled off since migrant crisis, according to figures research from US think tank 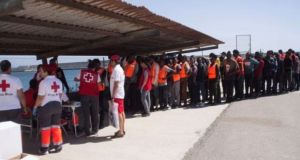 A landmark study has revealed an increase of up to one million in the number of unauthorised immigrants living in Europe, although the rate of increase has levelled off since the migrant crisis.

The figures are contained in a study by US think tank the Pew Research Centre. It shows that in 2017 there were between 3.9 million and 4.8 million such immigrants in European Union, or European Free Trade Association countries. This is up from between three million and 3.7 million in 2014.

While the absolute number of unauthorised migrants has climbed in recent years, they account for less than 1 per cent of Europe’s total population.

There is a slight decline on the numbers which followed the migrant crisis in 2015. The study found that in 2016 there were between 4.1 million and 5.3 million unauthorised migrants in Europe.

An unauthorised migrant is classed as someone who does not have a legal residency right in the country they are living in. Many of those in this category, up to one million individuals, have applied for permission to stay and are awaiting a decision.

Four countries – Italy, France, Germany and the United Kingdom – accommodate up to 70 per cent of the total, with more than half residing in Germany or the UK.