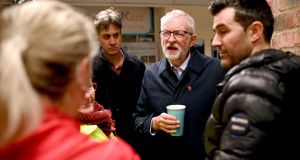 Boris Johnson will step up pressure on Nigel Farage’s Brexit Party on Wednesday, warning that only a Conservative majority government can deliver Brexit after next month’s election. Mr Farage is resisting calls to give the Conservatives a clear run in Labour-held marginal seats after he stood down Brexit Party candidates in 317 constituencies won by the Tories in 2017.

The British prime minister will use his first major speech of the campaign to tell Leave voters that if the Conservatives fail to secure an overall majority, they will wake up to a “horror show” led by Jeremy Corbyn and the Scottish National Party’s (SNP) Nicola Sturgeon.

“We face a historic choice. At this election the country can either move forwards with policies that will deliver years of growth and prosperity, or it can disappear into an intellectual cul-de-sac of far-left Corbynism,” Mr Johnson will say.

“We can honour the wishes of the people, or else we can waste more time, at the cost of a billion pounds per month, and have two more referendums, one on Scotland and one on the EU – an expense of spirit and a waste of shame, more political self-obsession and onanism. This is why I urge everybody undecided how to vote – imagine waking up on Friday the 13th of December after the election to find the Corbyn-Sturgeon coalition in Downing Street.”

Mr Farage’s former ally and donor Arron Banks said on Tuesday the Brexit Party leader had “48 hours to save Brexit” by standing aside in Labour-held seats the Conservatives need to win to secure a majority. But Mr Farage said the Conservatives should step aside for the Brexit Party in Labour-held constituencies the Tories have not won for 100 years “and will never win”.

In his speech on Wednesday at an electric vehicle manufacturer in the West Midlands, Mr Johnson will promise to drive through a “clean energy revolution” after Brexit.

“The UK is admired and respected around the world but people are baffled by our debate on Brexit and they cannot understand how this great country can squander so much time and energy on this question and how we can be so hesitant about our future. If we can get a working majority we can get parliament working for you, we can get out of the rut. We can end the groundhoggery of Brexit,” he will say.

Mr Corbyn on Tuesday visited Doncaster, which has been affected by serious flooding, after he accused the prime minister of leading “a woeful response” to it. He called on Mr Johnson to declare a national emergency and said Labour would spend £5.6 billion on improving flood defences.

Labour said it suffered a cyber-security attack targeting its digital platforms but that its defences ensured there was no data breach. Mr Corbyn described the attack as “very serious” and suspicious. “If this is a sign of things to come, I feel very nervous about it,” he said.