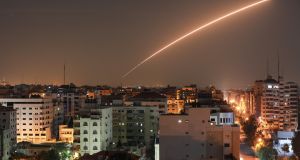 The death toll from Israeli air strikes on Gaza rose to at least 24 on Wednesday, as Egyptian and United Nations officials stepped up efforts to bring about a ceasefire between Israel and Islamic Jihad militants.

Egyptian intelligence officials and United Nations officials co-ordinated efforts from Cairo but Islamic Jihad said on Wednesday it was not yet “appropriate” to talk about mediation. “When we complete the response, it is possible to discuss calm,” said Islamic Jihad spokesman Musab al-Buraim.

However, representatives of other groups in Gaza were already suggesting concessions from Israel that may provide the framework for a ceasefire, including a commitment to refrain from targeted assassinations and not to target the weekly March of Return protests along the Gaza border.

Hamas, which controls Gaza, has so far refrained from ordering its fighters to fire rockets, partly due to pressure from Egypt, but Israeli military officials are concerned that this may change if the casualty figures in Gaza continue to rise.

According to Israeli media reports, Israel sent a message to Hamas through intermediaries, warning that if it joins the fighting Israel will begin flattening high-rise buildings, as it did during the 2014 Gaza war.

The flare-up began early on Tuesday morning when Israel killed a top Islamic Jihad commander in an air raid on his home in Gaza city.

Israeli prime minister Binyamin Netanyahu told a special cabinet meeting on Wednesday that Israel has no interest in sparking a wider confrontation but warned Islamic Jihad that Israel would keep pounding its members until the rockets stop.

“They know we will continue to strike them without mercy,” Mr Netanyahu said. “They have one choice: either stop these attacks or absorb more and more blows.”

Health officials in Gaza said that several of the 24 killed were civilians and at least three were children. Officials said more than 70 people had been wounded.

Israel claims that most of the Palestinians killed in air strikes were Islamic Jihad fighters, including some who had fired rockets or were poised to fire anti-tank missiles across the border.

More than 400 rockets have been fired at Israel during the two days of fighting and although there has been serious disruption to day-to-day life across southern Israel, as of Wednesday night no Israelis have been killed. Israel said that 90 per cent of rockets heading towards residential areas were intercepted by the Iron Dome missile defence system.

While Israel doesn’t want the situation to escalate into a military operation inside the Gaza Strip, artillery batteries and tanks, along with extra ground forces, have deployed close to the Gaza border.

The Israeli army said on Wednesday that the air force had targeted Islamic Jihad’s production of long-range rockets and warheads in Gaza, including its stores of raw materials.

“The indiscriminate launching of rockets and mortars against population centres is absolutely unacceptable and must stop immediately. There can be no justification for any attacks against civilians,” he said. “The UN is working to urgently de-escalate the situation.”