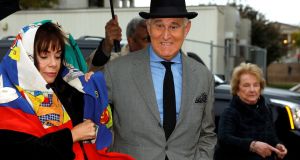 Roger Stone, former campaign adviser to US president Donald Trump, arrives with his wife Nydia for the continuation of his criminal trial on charges of lying to Congress, obstructing justice and witness tampering at the district court in Washington DC on Tuesday. Photograph: Yuri Gripas/Reuters

Rick Gates, testifying onTuesday in the criminal trial in federal court in Washington of Mr Trump’s longtime political adviser Roger Stone, said he witnessed a call between Mr Trump and Mr Stone related to the WikiLeaks website in late July 2016.

WikiLeaks disclosed several batches of stolen emails in the months before the November election that damaged Ms Clinton. US intelligence agencies and special counsel Robert Mueller later concluded they had been stolen by Russian hackers.

Although Mr Gates acknowledged he could not hear the contents of the call between then-candidate Mr Trump and Mr Stone as they were driving to LaGuardia Airport in New York city, he said that within 30 seconds or so of Mr Trump hanging up, he said that “more information would be coming”, in an apparent reference to WikiLeaks.

The testimony by Mr Gates, who appeared under a co-operation agreement, could potentially hurt Mr Stone as he faces charges of obstructing justice, witness tampering and lying to the US House of Representatives intelligence committee in its investigation into Russian interference in the election. Mr Stone has pleaded not guilty.

The testimony also appears to conflict with sworn statements that Mr Trump gave Mr Mueller, in which the president wrote that he had “no recollection of the specifics of any conversation” with Mr Stone from June 1st, 2016 through November 8th, 2016 and that he could “not recall discussing WikiLeaks” with Mr Stone.

Both the government and Mr Stone’s defence teams rested their cases on Tuesday. Closing arguments are scheduled for 1 pm (6pm Irish time) on Wednesday, followed by jury deliberations.

One such allegation is whether Stone misled the committee in September 2017 by stating that he never spoke to Trump campaign officials about what he was hearing through an intermediary about WikiLeaks or the website’s founder, Julian Assange.

Another allegation relates to claims Mr Stone made that comedian Randy Credico was his intermediary with WikiLeaks. Prosecutors said Mr Stone was not talking to Credico about WikiLeaks in the summer of 2016, but rather, he was speaking to a conservative author named Jerome Corsi, whom Mr Stone instructed in one email to “get to Assange!” and learn when the Clinton emails would be coming out.

Credico testified during the trial that he never actually spoke to Mr Assange on Mr Stone’s behalf, but at times pretended he would in order to get Mr Stone off his back.

Mr Gates’s testimony on Tuesday offered a window into the Trump campaign’s thinking on WikiLeaks, and appeared to align with testimony that former Trump campaign chief executive and ex-White House strategist Steve Bannon gave on Friday when Mr Bannon said the campaign saw Mr Stone as an “access point” to WikiLeaks.

Mr Gates said Mr Stone had spoken to him as early as spring 2016 about an expectation that “information would be coming out” from WikiLeaks.

He said he thought that Mr Stone knew this through non-public information and that top campaign officials including Mr Gates, then-campaign manager Paul Manafort and aides Jason Miller and Stephen Miller held brainstorming sessions based – in part based on Mr Stone’s predictions – about WikiLeaks’s plans.

At first, those predictions did not pan out. But when WikiLeaks finally dumped a batch of emails on July 22nd , 2016, the campaign was elated. “It was, in a way, a gift,” Mr Gates said.

In a court filing on Monday, prosecutors said the testimony by Mr Gates – who also testified last year against Manafort in a trial in which Manafort was convicted and sent to prison for 7½ years – will conclude his co-operation with the government, and they asked a judge to set a mid-December sentencing date.

Mr Stone’s attorneys tried to discredit Mr Gates on Tuesday by repeatedly asking him about the crimes he committed with Manafort.

Later, they also filed a motion with the judge asking her to acquit Mr Stone on charges of lying to Congress, saying the government had failed to prove that Mr Stone actually had any intermediary with WikiLeaks. The judge has not yet ruled.

Mr Stone’s attorneys also say that his testimony fell into line with the parameters of the committee’s investigation into Russian interference and that the scope of the inquiry in Mr Stone’s mind did not include WikiLeaks or Julian Assange.

In Mr Stone’s defence, his attorneys played the jury a roughly 50 minute-long audio tape of Mr Stone’s closed-door testimony to the committee, introduced some documents into evidence and rested their case without calling any witnesses. – Reuters