Unauthorised migrants ‘make up less than 1%’ of Europe’s population

Major study finds between 3.9m and 4.8m migrants in Europe without residency permits 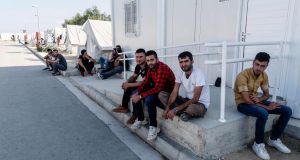 The number of unauthorised immigrants living in Europe has increased by up to a million in the last five years, but appears to have peaked in 2016 before levelling off.

The new figures are contained in a landmark study of flows into Europe of migrants who are living in a host country without a residency permit. The study was conducted by the US nonpartisan think tank the Pew Research Center.

Its results show that while the absolute number of unauthorised migrants has climbed in recent years, they account for less than one per cent of Europe’s total population. The research shows that at least 3.9 million, and possibly as many as 4.8 million, unauthorised migrants lived in Europe in 2017, up from between 3 million and 3.7 million in 2014.

Nearly a quarter (20-24 per cent) of those termed unauthorised migrants are asylum seekers awaiting a decision on their status.

The Pew research is the first comprehensive estimate of non-authorised migrant populations in Europe in more than a decade.

The figure for 2017 is a slight decline on a recent peak in 2016, when between 4.1 million and 5.3 million unauthorised migrants lived in Europe. Pew researcher Phillip Connor, the lead author of the report, said the “surge” of asylum seekers in recent years was a main contributing factor to the increase in absolute numbers, but cautioned that the figure also contained a significant number of people who “overstayed a visa or entered Europe illegally, many of whom migrated years ago”.

The Pew centre estimates that of the 3.9 million to 4.8 million unauthorised immigrants, about one million are awaiting a decision on their asylum application, giving them a temporary lawful status in their host country. There are between 19.6 million and 20.5 million migrants living in Europe with some sort of permission to remain, Pew found.

Experts who had advance access to the Pew data warned that while the impact of migration should not be overstated, and should not cause panic, governments should take steps to examine paths towards tackling the large populations of unauthorised migrants as an “increasingly toxic debate” about immigration gains greater prominence.

Victoria Rietig, a senior fellow and migration expert at the German Council on Foreign Relations, said large unregularised populations were potentially bad for security and social cohesion “if you have a growing parallel society within society”. She called for a realistic strategy that incorporated regularisation of some unauthorised migrants, as well as assisted return, and ultimately some level of deportation.

Speaking about Germany, which the research reveals is host to between a million and 1.2 million migrants, Ms Rietig said the country “needs to look at this problem and find pragmatic solutions that include both sides of this coin”.

The research shows that just four countries account for the vast majority of Europe’s unauthorised immigrant population, with just two – the UK and Germany – accounting for about half. Between 1 million and 1.2 million unauthorised migrants live in Germany, where the number roughly doubled between 2014 and 2016.

Europe needs to move beyond crisis, and into a post-crisis way of thinking about migration

Between 800,000 and 1.2 million live in the UK. Italy and France also account for significant numbers of the population, with 70 per cent of Europe’s total living in these four countries.

The research notes that the UK’s large population of unauthorised migrants is not likely to be linked to the 2015 surge of asylum seekers travelling to Europe, as it showed little change in the period. The UK’s figure is likely composed of people who have overstayed their visas or asylum seekers who have remained in the country after seeing their cases turned down.

In Italy, the increase appears to have been driven by its status as a landing spot for many of the migrants crossing the Mediterranean, as well as tighter border inspections by its western and northern European neighbours.

France, with a population of between 300,000 and 400,000 unauthorised migrants, also saw an increase in recent years, although its absolute number is lower than the three other large host countries. The research suggests that the French absolute number is kept low as there are several pathways to authorised residency for migrants who have lived there for several years.

Several European countries, including Ireland, had fewer than 100,000 unauthorised immigrants in 2017. A more detailed breakdown of Irish figures is not available, though the figure for those awaiting an asylum determination has increased from 4,000 to 6,000 in recent years. This is in line with current statistics available for those living in direct provision, including people placed in hotels over the past year due to a lack of places in dedicated centres.

According to the Pew data, 30 per cent of unauthorised migrants were from Asia-Pacific countries, 21 per cent from the Middle East or North Africa, and 17 per cent from sub-Saharan Africa. Nearly a quarter – 23 per cent – were from European countries outside of the EU and European Free Trade Association, including Russia and Turkey. More than half of the total unauthorised migrants are estimated to have lived in their country of residence for less than five years – again, the UK was an outlier, with 57 per cent likely to be resident for five years or more.

Andrew Geddes, chairman of Migration Studies at the European University Institute in Florence and director of the institute’s Migration Policy Centre, said there was little evidence of a “tidal wave” of anti-immigration sentiment sweeping across Europe, with most voters’ attitudes to migration remaining stable or becoming more favourable in recent years, especially when migrants are seen to be fleeing hardship or war-torn countries.

The US number has been shrinking in recent years, while Europe experienced a surge in numbers associated with the migrant crisis in 2015

However, he said the issue had been thrust to the forefront of the political agenda from 2015 onwards, which was “triggering for some sections of the electorate, and that played quite a role for radical far-right political parties”.

Public confidence in governments and the EU, and their ability to deal competently with migration issues, had lowered during the crisis, he said. Long-term studies of European sentiment towards migrants showed people were generally open to immigration but expected that access to benefits, labour market rights and other issues would be curtailed. He called for a new response from policymakers to the challenges of migration.

“The political challenge is having the political will to address these policy challenges,” Mr Geddes said. “Europe needs to move beyond crisis, and into a post-crisis way of thinking about migration.”

The US and Europe: Varying pictures of unauthorised migration

Both Europe and the US are strong economies that have acted as a magnet for people from poorer or war-torn parts of the world seeking better lives. However, the Pew research reveals that the composite picture of unauthorised migration in the two territories is quite different.

The US number has been shrinking in recent years, while Europe experienced a surge in numbers associated with the migrant crisis in 2015. A greater percentage of the European population is currently awaiting a decision on their permission to remain status – between 20 and 24 per cent, compared with nine per cent in the US.

Pathways into these populations are similar: migrants cross borders illegally or overstay legitimately obtained visas, mostly. However, the origins of US unauthorised migrant populations are much more homogenous, with 78 per cent originating from the Americas, and about half coming from Mexico alone.

US populations are much more embedded, with less than one-fifth present in the country for five years or less, and a majority arriving before the global financial crisis. European unauthorised migrant populations were also younger, with 65 per cent aged 35 or younger, compared with 41 per cent in the US.