Singapore welcomes its selection as location for Trump-Kim summit 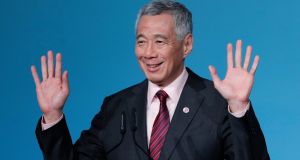 Singapore’s prime minister Lee Hsien Loong welcomed the decision to host the historic summit between US president Donald Trump and North Korean leader Kim Jong-un in the city-state as “a significant step on the path to peace” in the region.

“May it lead to a successful outcome,” Mr Lee said in a tweeted reply to Mr Trump’s announcement that the summit was to be held in Singapore on June 12th.

Singapore’s ministry of foreign affairs published a brief statement on the announcement, saying: “We hope this meeting will advance prospects for peace in the Korean peninsula.”

A small, prosperous and neutral island nation, Singapore is a financial hub off the southern tip of peninsular Malaysia in Southeast Asia with a population of 5.6 million.

A tightly run enclave with strong crowd control measures and a history of public order, it straddles East and West, is modern, wealthy and extremely secure, with some of the best infrastructure in the region. It also keeps a tight grip on media and public gatherings.

Confirming Singapore as the venue for the first meeting between a sitting US president and a North Korean leader, the White House said the location was chosen because it was able to ensure the security of both leaders and provide neutrality.

The summit will discuss North Korea’s nuclear weapons programme and its missile testing, which has led to deep divisions between Mr Trump and Mr Kim and rattled nerves in the region.

There is no fear of public protests taking place, something that will no doubt appeal to both Mr Trump and Mr Kim.

Singapore beat a number of candidates to host the talks including Mongolia, Switzerland, Sweden and the demilitarised zone (DMZ) between the two Koreas that hosted the historic inter-Korean talks late last month.

In 2015, President Xi Jinping chose Singapore for his talks with Taiwan leader Ma Ying-jeou and the city hosts a number of major regional events, including the annual Shangri-La Dialogue, a forum which welcomes many regional heads of state, defence ministers and top military officials.

It also hosts meetings of the Association of Southeast Asian Nations (Asean).

Pyongyang has a full embassy in Singapore, while Singapore is also a close ally of Washington.

Singapore is also a palatable choice for the other key players in the nuclear crisis – China, Japan and Russia.

The summit will be Mr Kim’s fourth official foray outside of North Korea since he became leader – he has been to China twice, including a visit last week to Dalian, and he stepped over the border into South Korea for last month’s summit, making him the first North Korean leader to cross into the South since an armistice ended hostilities in the Korean War in 1953.

It has yet to be revealed where in Singapore the summit will be held, but the three most likely venues are: the Shangri-La Hotel, which hosts the annual Shangri-La Dialogue and also hosted the meeting between Mr Xi and Mr Ma; the Marina Bay Sands casino, hotel and conference complex owned by Mr Trump’s close ally Sheldon Adelson; and the Sentosa island resort, which has beaches and resorts, including the Universal Studios theme park.

Sentosa also has two golf courses, which may not go unnoticed by Mr Trump.