Penalties urged for Hungary and Poland over refugee stance 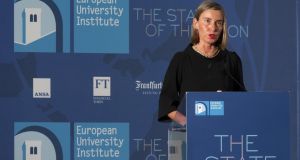 EU states such as Hungary and Poland which refused to participate in relocating refugees from overwhelmed frontline states like Greece and Italy should face financial penalties, the Greek president and a former Italian prime minister told a conference in Florence on Friday.

Italian senator Mario Monti said it was right that “conditionality” in EU funding “extends to whether countries take seriously burden-sharing”. But he acknowledged the difficulty of applying sanctions when unanimity voting applied, and that was a good case for ending unanimity. He noted ironically this was something Ireland well understood over taxation policy.

Greece’s president, Prokopios Pavlopoulos, said solidarity was a fundamental principle of the EU’s legal order and that “sanctions must be applied”.

“If the solidarity issue is not addressed we will not be able to save Europe” and the Schengen passport-free travel system could collapse, he said.

The European Commission has proposed a “conditionality” clause for the next budget, but one that limits sanctions to cases where it can be shown that there is not proper financial management of EU money.

Critics of the Hungarians and Poles say they are expecting solidarity from others in the disbursement of cohesion funds, but not willing to demonstrate it in accepting burden-sharing on refugees, and that they should face financial sanctions. Sanctions have also been advocated for breach of fundamental EU values like the rule of law.

They were  speaking at a session of the European University Institute’s (EUI) “State of the Union” conference, which was debating the commission’s proposed multi-annuall budget (MFF) for the union.

The conference was told of the results of commissioned polling on attitudes to the EU budget. These revealed significant majorities in the net contributor states, mainly northern, favouring lower EU spending – Germany is the counterintuitive exception. Whereas, in the south, majorities favoured increased EU spending.

But those polled throughout the union were in the majority enthusiastic about the idea of special EU taxes designed to support particular economic policies. These might include carbon emission taxes or levies on the major internet companies or on financial transactions. Such taxes are being considered by the union as ways of bridging the post-Brexit funding gap.

On a general question about attitudes to solidarity between member states, there was huge diversity between northern, against, and southern states, in favour.

The president of the EU’s Committee of the Regions, Karl-Heinz Lambertz, echoed the call for conditionality. “Rules need sanctions,” he said, but “where sanctions need unanimity, they will never work.”

Mr Monti, who was prime minister of Italy from 2011 to 2013, said that “net contributors to the EU budget like Germany and France were delighted to support Ireland’s development, yet less delighted that Ireland uses its tax instruments in such a way that their companies are driven out of their home country”.

Tax harmonisation was also a “powerful argument” for overcoming unanimity, he said. He pointed out that unanimity voting did not apply to sanctions in enforcing a number of EU policy areas like competition, state aid and single market rules breaches.

Prof Bridget Laffan of the EUI said she felt the commission’s budget proposal represented a good balance, reflecting political realities in reaching a consensus. It was important that the EU expands its spending on research and innovation and on youth programmes like Erasmus. If that meant accepting small cuts in farm and cohesion spending, so be it. “It is important that the EU spends more on young people than on cows,” she said.

Mr Monti, also a former commissioner, said he was encouraged that the polling showed a willingness to support taxes linked to specific economic objectives. That made it more likely that the commission would be able to make a case for new “own resources”, sources of funding such as EU-wide taxes that were independent of national treasuries. Mr Monti has produced a report for the commission on new “own resources” options.

Mr Lambertz said he was unhappy with the setting of a raised ceiling of 1.11 per cent of gross national income (GNI) on EU spending – it was not big enough for what needed to be done, and the cut of 10 per cent proposed in cohesion spending, a figure contested by the commission, was “a cut too much”, he said.

The Committee of the Regions had set up a cohesion alliance with recipient states and regions to defend current funding.