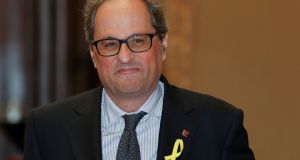 Catalonia’s parliament is due to meet on Saturday to debate the candidacy of Joaquim “Quim” Torra as the region’s new president. If he receives enough votes to be sworn in, a five-month political stalemate will end and, in theory, so too will the Spanish government’s use of direct rule in the region.

On Friday, the exiled former Catalan president, Carles Puigdemont, announced from Berlin his decision to name Mr Torra as his successor. He is the fourth candidate to attempt to fill the role following a regional election in December in which pro-independence parties won a slim majority. The Spanish judiciary has twice blocked Puigdemont’s attempts to face an investiture session from afar, as well as the candidacies of Jordi Turull and Jordi Sànchez, both of who are in prison.

If Mr Torra fails to win an absolute majority in the first-round vote in the parliament, he will face a second-round ballot on Monday, needing only a simple majority.

In his announcement, made via a video message, Mr Puigdemont thanked Mr Torra for his “efforts and sacrifice in accepting this post in extreme circumstances in Catalonia”.

Mr Puigdemont also explained he plans to remain the international voice of the Catalan government, while Mr Torra, if invested, would oversee the region’s internal affairs.

With the backing of Mr Puigdemont’s Together for Catalonia (JxCat) coalition and the Catalan Republican Left (ERC), the success of Mr Torra’s investiture bid is likely to hinge on the votes of the Popular Unity Candidacy (CUP). The CUP has consistently campaigned for Mr Puigdemont to return to the post, given that he was the independence movement’s original choice.

Mr Torra (55) is not facing any charges in connection with last autumn’s failed independence drive, meaning his candidacy has no apparent legal obstacles.

With a background in Catalan business and culture, he is described in La Vanguardia newspaper as “more of an activist than a politician”.

He founded a publishing house dedicated to the work of Catalan-language authors, as well as writing several non-fiction books. Now a deputy in Mr Puigdemont’s mainly centre-right JxCat, he was previously a member of the left-leaning Reagrupament party. Recently, he had a stint as president of òmnium Cultural, an organisation promoting Catalan culture and independence.

Mr Torra’s investiture would prevent the need for new elections, which are due to be called if a Catalan president is not in place by May 22nd.

However, while he could end Catalonia’s lengthy political stalemate, unionist parties see him as a provocative choice.

In one interview on Friday, he said that “building the republic” was a priority, adding: “We’re talking about a humanitarian crisis, we have people in prison and in exile.”

Meanwhile, critics have pointed to a series of strongly worded Twitter posts he wrote in 2012. “The Spanish only know how to loot,” read one. Another said: “We’ve been occupied by the Spanish since 1714”, in a reference to the fall of Barcelona to Bourbon troops. On Friday, Mr Torra apologised for the tweets.

Albert Rivera, leader of the Ciudadanos party, described Mr Torra as “a xenophobic, radical person, who doesn’t respect the Catalan majority or the Spanish people”.

Prime minister Mariano Rajoy said he was willing to talk to a new Catalan president, as long as the law was obeyed. But he also issued a warning about the use of article 155 of the constitution, which allowed his government to introduce direct rule in Catalonia and which is expected to be lifted once a new regional administration is in place.

“Article 155 is not an article in the constitution, it is a precedent and a procedure that will be available in the future if necessary,” Mr Rajoy said. “I hope it will not be necessary.”