US embassy move to Jerusalem another triumph for Netanyahu 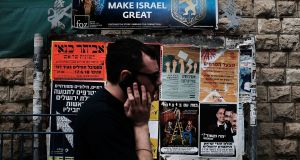 Ivanka Trump and Jared Kushner will next week join hundreds of luminaries in contested East Jerusalem to stand around a tiny plaque and applaud the long-delayed opening of an American embassy in Israel’s capital.

With the symbolic move from Tel Aviv, US president Donald Trump will reverse seven decades of US policy, defying a longstanding international consensus and, in Palestinian eyes at least, destroying hopes of a two-state solution.

But for Israeli prime minister Binyamin Netanyahu the embassy inauguration will be the second act in a series of diplomatic triumphs.

This week, he celebrated as Trump severed US support for the Iran nuclear deal, echoing Netanyahu’s arguments and citing his country’s intelligence in a moment of diplomatic high-drama. On Monday, he will oversee the fulfilment of a cherished national goal – the recognition of Jerusalem as Israel’s capital by its most powerful ally.

And in the coming weeks, Palestinians are braced for the unveiling of Trump’s “deal of the century”, a US-sponsored peace plan that is largely expected to be so weighted in Israel’s favour that Netanyahu will have one more reason to celebrate.

“Each one of these events in themselves would have been inconceivable just two years ago,” said Eugene Kontorovich, of the Jerusalem-based Kohelet Policy Forum, who pushed for the US to move the embassy.”They come at an extraordinary time that demonstrates the success of what Netanyahu is trying to do.”

The status of Jerusalem is one of the most contentious issues of the moribund peace process – Israel considers the holy city its undivided capital, Palestinians see East Jerusalem as their future capital – and no other country has an embassy there.

The embassy move, in particular, is a marker of Israel’s international renaissance, said Kontorovich.

“Israel is at the vanguard of international events, in complete solidarity with its Arab neighbours,” said Kontorovich, who advised the US government to open its embassy in East Jerusalem, which Israel annexed days after defeating Jordan in the 1967 war. “Far from being internationally isolated, it finds itself a vital player in the centre of Middle East diplomacy.”

In recent months, Israel has found itself in agreement with once-belligerent Arab neighbours, especially Saudi Arabia, as both try to contain Iran’s expansion, and Netanyahu has hosted world leaders from Indian prime minister Narendra Modi to Japan’s Shinzo Abe. On Wednesday, he was the personal guest of Russian president Vladimir Putin in Moscow.

But Netanyahu’s greatest triumph has been the seduction of Trump, said a senior Israeli official.

The embassy decision represents a classic example, the official said, when an Israeli request dovetailed with Trump’s instincts to make counterintuitive decisions that previous leaders have eschewed.

Saeb Erekat, the chief negotiator for the Palestine Liberation Organisation, has asked fellow diplomats to boycott Monday’s event. “Those who attend the ceremony will thus be sending an ominous message, a message that they encourage flagrant violations of international law and the inalienable rights of the Palestinian people.”

Nevertheless, the move is largely symbolic, with about a dozen staffers transferring from Tel Aviv, and no more than $500,000 spent on renovations of an existing old consulate building in the neighbourhood of Arnona.

US ambassador David Friedman, who has argued that Jewish settlements in the West Bank, under Israeli military occupation since 1967, be considered part of Israel, will move there immediately, US officials have said.

But the symbol itself has been potent enough to ignite months of deadly protests among Palestinians.

Previous US presidents had indicated that the future status of Jerusalem was to be decided between Israeli and Palestinian leaders in negotiations leading to the creation of a Palestinian state.

Leaked details of Trump’s proposed peace plan have also dismayed Palestinians, who may be asked to consider Abu Dis, a rundown town outside Jerusalem, as their capital.

Palestinian leaders have warned that the embassy opening would be accompanied by further large protests, both in East Jerusalem and in the West Bank. The Palestinian leadership has severed all official contact with Trump’s negotiators since the official announcement in December.

“It ended from our point of view the role of the United States as the broker, the owner of the peace process, which the United States have really done since 1991,” Naabil Shaath, an adviser to Palestinian president Mahmoud Abbas said.

He claimed that Trump was “siding totally with the Israeli annexation, with Israeli cleansing of our people from Jerusalem, and is giving Israel a chance to violate all the international law that guarded this situation”.

For weeks, tens of thousands of protesters have gathered near the fence that separates the Gaza Strip from southern Israel, motivated partially by the moving of the embassy.

Israeli snipers have shot hundreds of them, many in the legs, and killed at least 44. The IDF says those shot were attempting to breach the barrier and enter Israeli territory.

“Our people are marching against the siege [an Israeli blockade of the Gaza Strip] and the American decision to relocate the embassy,” said Yehiyeh Sinwar, the senior Hamas leader who has co-ordinated the protests. “The Trump administration has done all in its power to support the Israeli occupation.”

The protests are expected to peak just as the guests arrive in Jerusalem. Israelis celebrate May 14th as the date when they declared their independence in 1948, while Palestinians lament the day after as the Nakba, or catastrophe, when tens of thousands of Arabs either fled, or were forced to leave, their homes in what is now Israel.

Sinwar expects hundreds of thousands of people to march to the Gazan border. All will be unarmed, he vowed. But asked if they would try to breach the fence that separates the strip from Israel, he demurred.

“What’s the problem if hundreds of thousands storm this fence which is not a border of a state? What’s the problem with that?” he said. “This barbed wire is not a holy cow that is taboo to touch.” – Copyright The Financial Times Limited 2018