Ukraine: Return to monastery that became a morgue 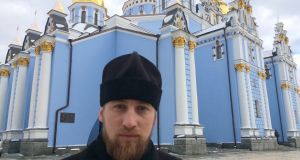 Father Mikhail at St Michael’s monastery in central Kiev, which served as a refuge and hospital for protesters during the 2013-14 Maidan revolution. On February 20th, 2014, the bodies of demonstrators shot dead by the police were brought there

St Michael’s monastery in Kiev stands on high ground between the Dnieper river and Maidan square, and its blue-and-white walls and golden domes are beloved of locals and photographed by countless visitors to Ukraine’s capital.

Five years ago on Wednesday, having served as a refuge and a field hospital for protesters during three months of anti-government rallies, St Michael’s became a makeshift morgue when police shot dead dozens of people on and around Maidan.

“The main cathedral became a hospital and basic operations were performed next door in the refectory church,” recalls Father Mikhail (28), a monk at St Michael’s.

“School desks were put together to make operating tables. People were scared of being arrested at hospitals so they came here instead. When police smashed the camp on Maidan, protesters brought their medical supplies here.

“On February 20th activists brought those who had been killed here too because they feared the police would take away the bodies and destroy them. The activists brought the dead here in cars and laid them out behind the cathedral, and covered them with flags and blankets.”

Scores of people were being shot in the centre of this European capital, and fellow protesters were risking their lives to get them to St Michael’s or the lobby of the Ukraina hotel beside Maidan, where volunteer medics fought to save them.

It had all begun in late November 2013, with demonstrations against the sudden decision of then Ukrainian president Viktor Yanukovich to scrap a deal on closer integration with the European Union in favour of stronger ties with Russia.

When riot police attacked a peaceful protest in the early hours of November 30th, demonstrators fled up the hill from Maidan to seek refuge in the 11th century St Sophia’s cathedral.

Its grounds were locked so they continued to nearby St Michael’s, where they found an open gate, sanctuary from arrest and a place for the injured to receive help.

“They got in here by luck, or rather by the will of God,” says Mikhail. “It was a Friday night, when we leave the back gates open to take the bins out.”

The monastery remained open throughout the protests, allowing even riot police to warm up and use the toilets during freezing shifts. “It didn’t matter to us monks – this was a place for reconciliation,” Mikhail says.

“But when Yanukovich and his government decided to disperse the protesters by actually killing people then, of course, we stood with the victims.”

Like many who took part in or witnessed the revolution, Mikhail is still inspired by the solidarity that sustained the vast protest camp on Maidan through an icy winter, and which people showed even amid the horror of its final days.

“Despite the death, blood, violence and fear, people felt a kind of friendship that you cannot find easily. If a doctor said he was a doctor he was trusted and got straight to work, no one checked his documents. If someone brought food or tablets no one suspected they could be bad or poisoned. People stood up for each other, and it left a really big impression.”

More than 50 people were killed on the deadliest day of a revolution that claimed about 130 lives, including those of 18 police officers.

Yanukovich fled Kiev on February 21st for exile in Russia. Soon after Russian president Vladimir Putin seized Crimea and then fomented a war in eastern Ukraine that has now killed more than 10,300 people and displaced 1.6 million.

The politicians who took power after the revolution will be judged at the ballot box this year, and their dismal ratings reflect Ukrainians’ anger over continuing corruption, impunity and massive disparities in wealth.

President Petro Poroshenko, a confectionary billionaire, hopes to win re-election next month despite stalling on anti-graft reforms and protecting a criminal justice system that has failed key tests; in the case of the Maidan killings, for example, most suspects evaded arrest and found refuge over the border in Russia.

Poroshenko may benefit from having played a key role last year in securing the Ukrainian Orthodox Church’s independence from Moscow, but that historic achievement does not blind Mikhail or many fellow believers to how the revolution’s demands remain unmet.

“Those events changed me and my idea of my country,” says the monk. “Although it is very corrupt it is also very dear to us. I saw my compatriots dying for their people, for the right to live in a democratic state with a path to Europe. for the law to function and be applied to everyone. That’s what we wanted then, and what we still want now.”