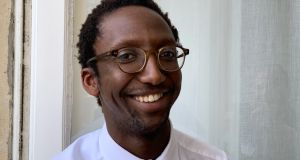 National Assembly deputy Hervé Berville was born a Rwandan Tutsi and was four years old when French soldiers took him from an orphanage in Kigali, leading to adoption by his French family. Photograph: Lara Marlowe

There is much that is typically Breton about Hervé Berville: his first name, the fact he learned to play the accordion as a child. His grandfather (97) is one of the best-known farmers in the Côtes-d’Armor district of northwest France.

The 29-year-old deputy in the National Assembly grew up in a left-leaning, Catholic household, typical of Brittany. At Sunday lunch, the Bervilles and their five children talked about politics and social issues. Hervé won 64 per cent of the vote in the 2017 election because, he says, everyone in the area knows him.

But in the hate-filled atmosphere that has taken hold over three months of demonstrations by yellow vest or gilets jaunes protesters, Berville has three times received threatening, racist messages. “The first one said, ‘You should have been killed by a machete blow in Rwanda’,” Berville recounts. He was born a Rwandan Tutsi and was four years old when French soldiers exfiltrated him from an orphanage in Kigali, leading to adoption by his Breton family.

“I received another message that said, ‘We’re going to cut off your head and put it on a pike on the Place de la Concorde’,” Berville continues. He says he had never experienced racism before entering politics. “Your first reaction is stupefaction. How could a person write such horrors? But unfortunately, as a black person, you get used to being called a monkey or a chimpanzee on Facebook and Twitter every time you go on television.”

Berville holds a masters degree in development from the London School of Economics. He was working for the French development agency in Mozambique when the far right Front National, now called the Rassemblement National, won the 2014 European elections. Suddenly, it appeared possible that far right leader Marine Le Pen could become president of France. Berville decided to return to France and get involved in the 2017 campaign.

Also in 2014, Berville was impressed by an article by Emmanuel Macron in the alumni magazine of Sciences Po, where he did his undergraduate studies. “It was about thinking as a man of action and acting like a man of thought.”

Berville joined Macron’s youth movement the following year. By April 2016, when Macron founded his party, En Marche, Berville was training Kenyan business people in Nairobi, on behalf of Stanford University. He opened the Kenyan chapter of the party.

Berville resigned from his job with Stanford and returned to France to join Macron’s campaign in November 2016. “My family, friends and colleagues said, ‘Are you crazy?’ They couldn’t believe a guy with no party and no financing could win the election.”

Berville sees the gilets jaunes crisis as an “aftershock” of the “earthquake” of the 2017 elections. “We ended decades of bipartisan politics, of a left-right ping-pong game ... In the old days, you had to work your way up from town councillor to the department to the region, then become a parliamentary assistant... Now people see someone like me, who was just a development economist two years ago, and I’m in the National Assembly. They thought politics was closed to them. Now they say, ‘We’re in a new democratic era’ and they want to seize hold of everything right away.”

The Rwandan genocide, which changed the course of Berville’s life, started 25 years ago on April 7th. He grows more serious, somehow less sure of himself, when I broach the subject. He says he has few memories of Rwanda, and is not certain what he really remembers and what was suggested to him later.

Berville’s birth parents had in fact died before the genocide started. “It was a time of confusion. There were killings, a state of civil war before 1974. Attacks and discrimination against Tutsis were so bad that hundreds of thousands had already fled to neighbouring countries. My remaining relatives preferred to put me in an orphanage so I would be adopted, so that I would have a future.

“I was evacuated by the French army with other orphans during the first week of the genocide in April. I was a Tutsi, so it was very likely I would have been...,” his voice trails off.

He has returned to Rwanda three times and has met his relatives. “The feelings I have are personal. A lot of my family were killed. It is difficult to talk about it. They are my family too. I am fortunate not to have seen the atrocities at first hand, like my aunts, uncles and cousins. I did not have to live through the aftermath and rebuild my life, as they did.”

François Mitterrand’s administration has often been criticised for its role in Rwanda. A parliamentary commission reported in 1998 that France co-operated militarily with the French-speaking Hutu government “against a background of ethnic tensions, massacres and violence”.

Others have gone so far as to accuse France of complicity in the genocide. The alleged motive was to preserve French influence. The then exiled Tutsi leader, Paul Kagame, an English-speaker, was perceived to be allied with the US and Britain. Kagame has been president of Rwanda for 19 years, and his relations with France have been strained.

Berville has navigated his multiple identities gracefully, but he does not want to be defined by his Rwandan origins. “I am French. I am not Franco-Rwandan.”